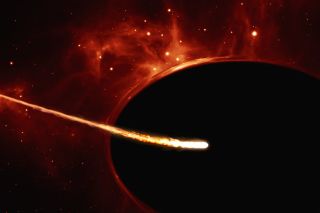 An artist's impression of a Sun-like star close to a rapidly spinning supermassive black hole, with a mass of about 100 million times the mass of our Sun.
(Image: © M. Kornmesser/ESO/ESA/Hubble)

Our love of black holes continues to grow as our knowledge of these celestial bodies expands. The latest news is the discovery of a rare "middleweight" black hole, a relative newcomer to the black hole family.

So what is it about black holes, these gravitational prisons that trap anything that gets too close to them, that captures the imagination of people of all ages and professions?

As far back as 1783, within the framework of Newtonian dynamics, the concept of "dark stars" with sufficiently high density that not even light can escape their gravitational pull had been advanced by the English philosopher and mathematician John Michell.

Almost immediately after Albert Einstein presented his theory of general relativity in 1915, which supplanted Newton's description of our Universe and revealed how space and time are intimately linked, fellow German Karl Schwarzschild and Dutchman Johannes Droste independently derived the new equations for a spherical or point mass.

Although at the time the issue was still something of a mathematical curiosity, over the ensuing quarter of a century nuclear physicists realised that sufficiently massive stars would collapse under their own weight to become these previously theorised black holes.

Their existence was eventually confirmed by astronomers using powerful telescopes, and more recently colliding black holes were the source of the gravitational waves detected with the LIGO instrumentation in the United States.

The densities of such objects is mind-boggling. If our Sun were to become a black hole, it would need to collapse from its current size of 1.4 million km across to a diameter of less than 6km. Its average density within this "Schwarzschild radius" would be nearly 20 billion tonnes per cubic centimetre.

The increasing strength and pull of gravity as you get closer to a black hole can be dramatic.

On Earth, the strength of the gravitational pull holding you to its surface is roughly the same at your feet as it is at your head, which is a little bit farther away from the planet.

But near some black holes, the difference in gravitational pull from head to toe is so great that you would be pulled apart and stretched out on an atomic level, in a process referred to as spaghettification.

In 1958, the American physicist David Finkelstein was the first to realise the true nature of what has come to be called the "event horizon" of a black hole. He described this boundary around a black hole as the perfect unidirectional membrane.

It's an intangible surface encapsulating a sphere of no return. Once inside this sphere, the gravitational pull of the black hole is too great to escape – even for light.

While such strange solutions to the equations of general relativity first appeared in the 1949 work of Austrian-American logician Kurt Gödel, it is commonly thought that they must be a mathematical artefact yet to be explained away.

The argument was that if matter falls into a black hole, then perhaps it is spewed out into our universe from a white hole.

This idea is partly rooted in the mathematical concept known as an Einstein-Rosen bridge. Discovered (mathematically) in 1916 by the Austrian physicist Ludwig Flamm, and re-introduced in 1935 by Einstein and the American-Israeli physicist Nathan Rosen, it was later termed a "wormhole" by Wheeler.

In 1962, Wheeler and the American physicist Robert Fuller explained why such wormholes would be unstable for transporting even a single photon across the same universe.

Not surprisingly, the idea of entering a (black hole) portal and re-emerging somewhere else in the universe – in space and/or time – has spawned countless science fiction stories, including Doctor Who, Stargate, Fringe, Farscape and Disney's Black Hole.

Ongoing productions can simply claim that their characters are travelling to a different or a parallel universe to our own. While it appears to be mathematically feasible, there is of course no physical evidence to support the existences of such universes.

But this is not to say that time travel, at least in a limited sense, is not real. When travelling at great speed, or perhaps falling into a black hole, the passage of time does slow down relative to that experienced by stationary observers.

Clocks flown quickly around the world have demonstrated this, displaying time lags in accordance with Einstein's theory of special relativity.

The 2014 movie Interstellar played on this effect around a black hole, thereby creating a sense of travelling forward in time for astronaut Cooper (played by Matthew McConaughey).

Despite the strangely endearing name, the phrase "black hole" is perhaps somewhat misleading. It implies a hole in space-time through which matter will fall, as opposed to matter falling onto an incredibly dense object.

What actually exists within a black hole's event horizon is hotly debated. Attempts to understand this include the "fuzzball" picture from string theory, or descriptions of black holes in quantum gravity theories known as"spin foam networks" or "loop quantum gravity."

One thing that does seem certain is that black holes will continue to intrigue and fascinate us for some time yet."

This article was originally published on The Conversation. Read the original article. Follow all of the Expert Voices issues and debates — and become part of the discussion — on Facebook, Twitter and Google +. The views expressed are those of the author and do not necessarily reflect the views of the publisher. This version of the article was published on Space.com.