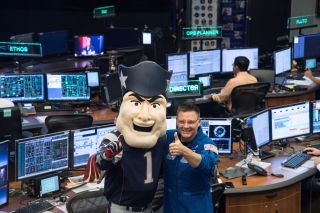 A NASA astronaut poses with Pat Patriot, mascot of the New England Patriots, during a visit to Mission Control in Houston at Johnson Space Center ahead of Super Bowl LI. The Patriots will face off against the Atlanta Falcons during the big game.
(Image: © James Blair/NASA)

NASA is truly ready for some football!

In a new video, NASA employees and affiliates virtually toss a football from space to various centers across the United States to celebrate the Super Bowl, as well as NASA's journey to Mars.

The video begins with Shane Kimbrough, Expedition 50 commander, holding a football. "To all of you back on Earth in the Super Bowl city of Houston, welcome," he says. "We hope you enjoy our great city and have a fabulous Super Bowl week."

Kimbrough then tosses the football off camera, and the next scene shows a football landing in the hands of NASA astronaut Victor Glover, on a treadmill in NASA's countermeasure training laboratory in Houston. From there, the football passes to people all over the United States.

Some of the places the football lands includes:

Viewers are also treated to football facts, such as:

So if you watch the big game today, take a moment to think about what a future Super Bowl might be like in space.