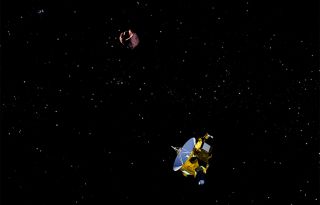 "One mile per hour may not sound like much, but over the next 23 months, as we approach MU69, that maneuver will add up to an aim point refinement of almost 6,000 miles [10,000 kilometers]," mission principal investigator Alan Stern, of the Southwest Research Institute in Boulder, Colorado, said in a statement. [New Target For New Horizons — Boldly Going (Orbit Animation)]

The New Horizons team conducted yesterday's burn to adjust for recent observations by NASA's Hubble Space Telescope, which helped pin down 2014 MU69's orbit and the probe's position in space, mission officials said in the same statement. The maneuver was the first trajectory-altering move for New Horizons since the autumn of 2015, when a series of four firings put the spacecraft on course for its Jan. 1, 2019, encounter with 2014 MU69, they added.

That flyby will be the second for New Horizons, which got the first-ever up-close looks at Pluto and its moons on July 14, 2015. On that day, the spacecraft zoomed within just 7,800 miles (12,550 km) of Pluto's surface, revealing a world of towering water-ice mountains, vast nitrogen-ice plains and a stunning diversity of other features.

The $700 million New Horizons mission launched in January 2006, with the primary aim of lifting the veil on the Pluto system. The spacecraft is currently operating on an extended mission, which will carry it through the flyby of 2014 MU69. During this extended mission, New Horizons has also been studying, from afar, a number of Pluto's fellow residents in the Kuiper Belt, the ring of frigid bodies beyond Neptune's orbit.