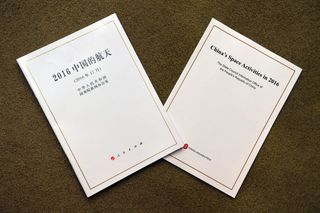 China's Information Office of the State Council on Tuesday (Dec. 27) released an expansive white paper on that country's space activities in 2016. The document also projected a look at China's space agenda over the coming years, a plan that includes a lunar sample-return mission and the first soft-landing on the far side of the moon in 2018.

In an associated press conference marking the release of the white paper, vice administrator of the China National Space Administration, Wu Yanhua, stated that China plans to develop a new generation of heavy-lift carrier rocket, the "Changzheng-9" or "Long March-9." That booster is intended for future manned lunar landing and deep space exploration missions, according to a report by the website Crienglish.com.

"There is an old saying in aerospace industry, 'If you want to develop space industry, you need to work on space rockets first; and if you want to develop space rockets, you need to work on its engines first,;" Wu said in the press conference. "So now we need to make progress in the heavy-lift carrier rocket's engine first, to create conditions for the whole project. It is planned that the heavy-lift carrier rocket's maiden flight will be held around 2030." [China in Space: A Video Look Back]

The wide-ranging white paper lays out the purpose of China's space program as well as its vision and principles of development. It also includes a summary of China's major developments in space since 2011, and the major tasks ahead for the next five years.

The document also includes policies and measures for development and the role of international exchanges and cooperation.

In terms of deep-space exploration, the white paper explains that China will continue its lunar exploration project, and strive to attain the automated extraterrestrial sampling and returning technology by space explorers.

"We plan to fulfill the three strategic steps of 'orbiting, landing and returning' for the lunar exploration project by launching the Chang'e-5 lunar probe by the end of 2017 and realizing regional soft landing, sampling and return. We will launch the Chang'e-4 lunar probe around 2018 to achieve humanity's first soft-landing on the far side of the moon, and conduct an in-situ and rover detection and relay communications misison from the Earth-moon L2 point."

Also noted is that through China's lunar exploration project, topographic and geological surveys will be implemented and laboratory research conducted on lunar samples; geological survey and research as well as low-frequency radio astronomy observation and research will be carried out targeting the landing area on the far side of the moon for a better understanding of the formation and evolution of the moon.

At the press conference hosted by the State Council Information Office, Wu also detailed work underway on Chang'e-5, targeted for liftoff at the end of 2017.

"We will take samples from the surface of the moon as well as different depths of the moon rocks after drilling, and the samples will be used by scientists for scientific research," Wu said.

Wu added that work related to Chang'e-5 is going smoothly.

Explained in the white paper is that China intends to execute its first Mars exploration operation, and grasp key technologies for orbiting, landing and roving exploration.

China plans to launch this Mars probe by 2020 to carry out orbiting and roving exploration.

"It will conduct further studies and key technological research on the bringing back of samples from Mars, asteroid exploration, exploration of the Jupiter system and planet fly-by exploration. When conditions allow, related projects will be implemented to conduct research into major scientific questions such as the origin and evolution of the solar system, and search for extraterrestrial life," the paper explains.

In the category of human spaceflight, the white paper notes that China plans to launch the Tianzhou-1 cargo spacecraft to dock with the now Earth-orbiting Tiangong-2 space laboratory, "and research and master key technologies for cargo transport and replenishment to accumulate experience in building and operating a space station."

"We strive to acquire key technologies and conduct experiments on such technologies," the paper continues, "to raise our manned spaceflight capacity, laying a foundation for exploring and developing cislunar space." [China's Tiangong-2 Space Lab in Pictures]

In June 2016, China's new Wenchang launch center on Hainan Island celebrated its first launch. Renovations have also been accomplished in the Jiuquan, Taiyuan and Xichang launch sites, "forming a launch site network covering both coastal and inland areas, high and low altitudes, and various trajectories to satisfy the launch needs of manned spaceships, space laboratory core modules, deep space probes and all kinds of satellites," the document explains. "The integrated capacities and functions of space launch sites will be enhanced and exploited to meet various needs."

The white paper concludes by noting that the country is "standing at a new historical starting line," with China "determined to quicken the pace of developing its space industry, and actively carry out international space exchanges and cooperation."

Since 2011 China has signed 43 space cooperation agreements or memoranda of understanding with 29 countries, space agencies and international organizations.

Leonard David is author of "Mars: Our Future on the Red Planet," published in October by National Geographic this October. The book is a companion to the National Geographic Channel six-part series, Mars. A longtime writer for Space.com, David has been reporting on the space industry for more than five decades. Follow us @Spacedotcom, Facebook or Google+. Originally published on Space.com.