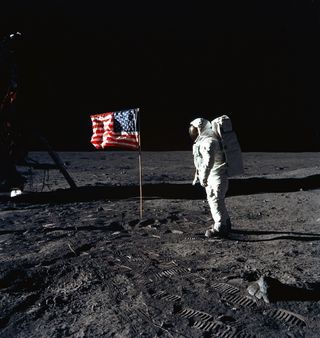 In 1962 that President John F. Kennedy delivered the now-famous line in a speech at Rice University in Texas: "We choose to go to the moon in this decade and do the other things, not because they are easy, but because they are hard." Seven years later, the first humans walked on the lunar surface.

It took a Cold War space race with the Soviet Union to spur such statements and spark the United States' manned rush to the moon, a race that led to the first manned lunar landing with Apollo 11 on July 20, 1969. Once the last Apollo mission, Apollo 17, wrapped up in 1972, no human has returned. NASA has sent lunar probes, but today, the agency is focused more on a potential human asteroid visit and putting boots on Mars. Other countries, on the other hand, are starting to think about manned lunar missions.

"NASA is not currently considering a human return to the moon and remains focused on the asteroid-retrieval mission," James Clay Moltz, a professor in the department of national security affairs at the Naval Postgraduate School in Monterey, California, wrote in an email to Space.com. [Apollo 11's 45th Anniversary: Complete Coverage]

Before President Barack Obama took office, NASA was operating under the George W. Bush-led vision called Constellation, which included a plan to return to the moon.

"The Obama administration made the calculation that President Bush's Constellation program was unaffordable and that, in terms of science, there was nothing 'new' offered by returning to the moon," Moltz added. "A Mars mission is still a U.S. goal, but it remains a long way off, especially given the current lack of independent U.S. human access to space."

In the past five years, several nations have openly mused about launching their own human missions to the moon. In 2010, Japan talked of sending a humanoid robot. China has been rumored to be considering a lunar mission, although the nation talks mostly about constructing a space station. India, Iran and Russia have also been cited as nations thinking about going the moon.

"It's only three days away," John Logsdon, a professor emeritus of political science and international affairs at The George Washington University's space policy institute, told Space.com. "Compared to any other destination, if you're going to go anywhere, the moon is basically an offshore island."

Heading there is not a stated U.S. goal, although it was a brought up in a recent National Research Council report and, according to Logsdon, Obama has expressed an interest in participating in other nation's moon missions — just not leading one.

While Logsdon said going to the moon would be primarily for national prestige, Moltz added that it would be a "useful environment" to test how to live outside Earth. Unlike going to Mars, he added, it would be relatively easy to mount a rescue operation, since it would take just a few days to send help there.

"In my opinion, yes, the moon should be our main focus in order to establish a semi-permanent research base and to build our capabilities for long-duration spaceflight and settlements," Moltz said. [Moon Base Visions: How to Build a Lunar Colony (Photos)]

"We will also learn more about using lunar materials for energy and construction purposes," he added. "Finally, a lunar mission would offer better prospects for meaningful cooperation with foreign partners, which is likely to be essential to fund and carry out a Mars mission in the future."

Both Logsdon and Moltz said that with enough money and dedication, several different countries could conceivably go back to the moon one day.

Both China and Russia, for example, have sent humans into Earth orbit. Russia also knows about long-duration spaceflight through its former Mir space station and participation in the International Space Station program.

"The real questions are funding, risk tolerance and long-term commitment, none of which can be undertaken lightly," Moltz said. "Given its growing economy and apparent commitment to space exploration, China's plans, in particular, pose a serious challenge to U.S. leadership, especially if it were to organize a major international mission to the moon, which might attract U.S. allies in Europe."

Russia has a stated goal of getting humans to the moon in the 2020s or 2030s, Logsdon added, while China is more focused on a midsize space station. However, Logsdon noted that any country with a human spaceflight program would likely set the moon as a target.

That also goes for India, which has a strong rocket program. However, India also finds itself battling a tough economy and domestic problems.

"I think it's an unlikely candidate all by itself to put together the resources," Logsdon said.

A manufacturing cooperative called Astro-Technology SOHLA in Japan once mused that humanoid robots could be sent to the moon, but Logsdon said that, in the five years since, the nation has decided instead to look for exploration with more direct benefits to Earth. Moreover, scientists would likely want humans on the surface anyway, since they would be more flexible in making decisions, Moltz said.

Both Moltz and Logsdon agreed that there is a growing movement in the United States to return to the moon, even if it's not a stated presidential or NASA goal yet. If such a manned lunar mission does happen, it will most likely be as a part of an international consortium.

"This option still remains a viable path to success if some future U.S. (or foreign) leader decided to revive such a mission," Moltz said, pointing out that Constellation failed because it did not marshal the international expertise or finances required to pull it off.

"But it will take political vision, hard work and compromises," Moltz added. "In the end, though, such an effort is likely to be more sustainable than any project led by a single nation."