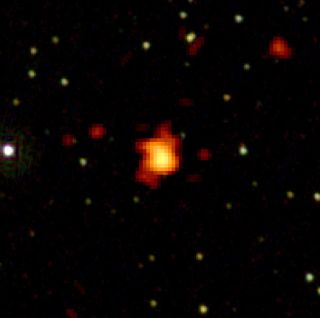 Thegamma-ray blast detected by the Fermi(GLAST) Gamma-ray Space Telescope on Sept. 15, 2008 exceeded the power ofapproximately 9,000 ordinary supernovas, or exploding stars. This assumes thatthe energy was emitted equally in all directions, although gamma ray burstsusually shoot their energy out in tight jets.

"Wewere waiting for this one," said Peter Michelson, the principalinvestigator on Fermi's Large Area Telescope at Stanford University."Burst emissions at these energies are still poorly understood, and Fermiis giving us the tools to understand them."

Fermirecorded theexplosion, designated GRB 080916C, in the constellation Carina. The spaceobservatory's LargeArea Telescope and the Gamma-ray Burst Monitor picked up on energiesranging between 3,000 to more than 5 billion times that of visible light in theinitial blast.

Gamma-raybursts represent the universe's most spectacular light shows anyway. But thisburst had the greatest total energy, the fastest motions and the highest-energyinitial emissions ever seen.

Astronomersbelieve that these bursts occur when exotic massive stars runout of nuclear fuel. As a star's core collapses into a black hole, jets ofmaterial — powered by processes not yet fully understood — blastoutward at nearly the speed of light.

Thejets punch through the collapsing star and continue into space, eventuallypassing through gas veils formerly shed by the star and creating brightafterglows that fade with time.

Suchafterglows, which come in various wavelengths of light, provide the opportunityfor astronomers to estimate the distance of the gamma-ray burst from Earth. Fartherobjects have a redder wavelength as the brightness of the explosion fades outamong intervening gas clouds.

Inthe case of the burst detected by Fermi, a ground-based astronomy team at theEuropean Southern Observatory in La Silla, Chile checked out the fadingafterglow using a 2.2-meter telescope. With the help of the Gamma-Ray BurstOptical/Near-Infrared Detector, known as GROND, they established that theexplosion had taken place 12.2 billion light-years away. That means it occurred12.2 billion years ago — when the universe was only about 1.5 billionyears old — and the light just arrived at Earth.

"Already,this was an exciting burst," said Julie McEnery, a Fermi deputy projectscientist at NASA's Goddard Space Flight Center in Maryland. "But with theGROND team's distance, it went from exciting to extraordinary."

Astronomersalso gauged the slowest possible speeds for material emitting the initial gammarays. Such gas bullets must have moved at a sizzling 99.9999 percent the speedof light within the jet of the burst — the most extreme recorded to date.

Onecurious aspect of the burst is a five-second delay separating thehighest-energy emissions from the lowest. Such a time lag has been seen clearlyin only one earlier burst.

"It may mean that the highest-energy emissions are coming from differentparts of the jet or created through a different mechanism," Michelsonsaid. The team's results appeared this week in the online edition of thejournal Science.

NASA's Swift satellite coincidentally recorded a different gamma-ray burst justfour days after the event picked up by Fermi. The later burst arose from anexploding star 12.8 billion light-years away, making it the farthestsuch event ever detected.

Editor'sNote: Thisstory was corrected to reflect the distance to the object being 12.8 billionlight-years, not 12.8 light-years.