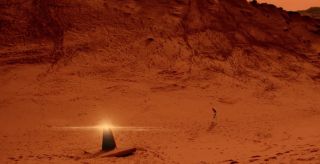 A moment on Mars from "Seat 25," starring Madeleine Cooke. The film featured in the Raw Science Film Festival in Los Angeles on Saturday (Dec. 10).
(Image: © Seat 25 via YouTube)

LOS ANGELES — Maxx the gigantic (and somewhat intimidating) robot wants you to get back into the theater. The premiere of a new film about the first colonists to travel to Mars is about to start, and when you must look up 3 feet (about 1 meter) to sheepishly nod to a giant robot, you do what you're told. And so began the Raw Science Film Festival in Los Angeles on Saturday (Dec. 10).

The event is the brainchild of Keri Kukral, the force behind the Raw Science website. The organization is devoted to STEM (Science, Technology, Engineering and Math) and STEAM (add in Art) education and the popularization of science across many venues, including online articles, slickly produced videos and live events such as this one. Kukral is a fascinating presence herself, having begun her career as a professional ballerina, then moving into medical technology development before founding Raw Science in 2013. It's a unique career trajectory.

The festival is a unique mix as well. Held on the lot of the 21st Century Fox movie studio, it is not so much a film festival as a celebration of innovation in science communication. The guest list included luminaries such as theoretical physicists Kip Thorne (who was an executive producer on the film "Interstellar") and Stephen Wolfram (an advisor on the recent film "Arrival" and developer of the science-visualization tool Mathematica), plus Naveen Jain (entrepreneur and co-founder of Moon Express, an effort to send a privately-funded probe to the moon), Philip Lubin (a professor of physics at the University of California, Santa Barbara) and Janet Ivey (founder of the hit children's TV series "Janet's Planet"), among others. [Strange Cinema: Space.com's Favorite Offbeat Space Movies]

The film festival dominated the first part of the day, featuring films notable for their interpretations of science aimed at a general audience. The screenings began with the space-based short film "Journey" by Radheya Jegatheva, a 17-year-old Australian student, artist, writer and now filmmaker with a gift for both prose and visual engagement. The piece is elegant, polished and deeply thoughtful.

The new film "Seat 25" was next. Set in about 2020, the feature-length story centers on a young woman who has won, via lottery, the final seat on the first flight to Mars, joining 24 other hand-picked passengers. The project that will send them to the Red Planet is led by a fictional character who is clearly a mash-up of Elon Musk of SpaceX and Bas Lansdorp of Mars One. The film was produced on a micro budget, but does not look it. The acting is first-rate, headlined by a sensitive performance by the doe-like Madeleine Cooke, and the film is ably directed by Nicholas Agnew. Joe Kaufman, the movie's director of photography, capably wrangled the cinematography. The film is well worth tracking down once released more widely.

Next up was the visual splendor of "A Passage to Mars," an epic and stunning documentary about an Arctic expedition to NASA's Haughton Mars Project base. Produced by Jean-Christophe Jeauffre and scientist Pascal Lee, and narrated by "Star Trek" actor Zachary Quinto, this feature documentary was released to high praise earlier this year.

Central to the story is the transporting of a new, ice-adapted Humvee from the last outpost in the frozen Canadian north to a research station on Devon Island, a punishing, icy landscape that's 100 miles (160 kilometers) across. A crew of six adventurers makes the journey, facing innumerable hardships and challenges along the way. At various stops in the trek, stunning visual effects remind viewers of the connective tissue between this expedition and similar hardships that will face explorers on Mars. The film is currently available for viewing on Amazon.

The early evening featured a round table hosted by iGIANT (the Impact of Gender/Sex on Innovation and Novel Techniques), an initiative that originated in the White House Office of Science and Technology Policy and is hosted through Stanford University. The round table focused on sex and gender in spaceflight: how to enhance the design and implementation of space hardware and facilities for women, as well as a more general push for greater gender inclusiveness in space initiatives.

The highlight of the festival was the evening gala, centered on an awards ceremony for the competing films, with a number of short talks interspersed throughout. Moon Express' Jain gave a stirring speech about the boundless resources that will become available as the new space age continues to unfold, centered on universal wellness for humanity.

"The most innovative decade of human history will occur in the next 10 years and will change the trajectory of how we live," he said. "Someone in this room will solve the big problems," he added, addressing the innovative young thinkers who made up a large part of the audience.

Lubin, of the University of California, Santa Barbara's Experimental Cosmology Group and an advisor to the privately funded Breakthrough Initiatives series of astronomical projects, spoke about high-speed photonic propulsion to Mars and beyond with micro craft flying at one-third the speed of light.

"Even with all the mass in the universe used to power a conventional chemical rocket, we could not get a single gram of mass to the speed of light using chemical propulsion," he said. "We need to change the paradigm of how we push things through space."

He added that the spacecraft Voyager, among the fastest vessels that humankind has sent out, would take over 100,000 years to reach Alpha Centauri if it the craft were headed in that direction. Lubin's group's design, using massive lasers on or near Earth to propel small robotic probes, would take about 20 years to accomplish the same mission. (The Breakthrough Starshot program, which is striving to build those probes, began in April.)

Thorne introduced Wolfram and presented him with the Kip Thorne Award for Scientific Accuracy in a Motion Picture, a prize first presented to Thorne last year for his work on the movie "Interstellar." Since the actual trophy was not yet ready, Thorne, with a chuckle, handed over his own trophy that he received at the same festival last year. Wolfram was an advisor on the new first-contact movie "Arrival." Wolfram then went on to introduce his son Christopher, who proceeded to dazzle the attendees with his computer simulations of the linguistic visuals used in the film. It was an inspiring moment for the STEM/STEAM component of the event. "Arrival" was the winner of the event's Best Picture award. ['Arrival', AI and Alien Math: Q&A with Stephen Wolfram]

The evening was ably, and humorously, emceed my Paul Hynek, a major contributor to the visual effects work in "Avatar," "The Hobbit" and the "Planet of the Apes" film franchises.

The giant robot named Maxx joined the presenters on the stage toward the end of the awards ceremony, after strolling intimidatingly throughout the crowd all evening. Though powered by a human operator inside, this massive showpiece was a convincing simulator of mechanical beings to come, and was a hit with the audience — and ably got them to their seats when necessary.