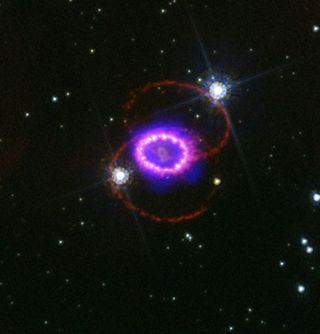 Supernova 1987A occurred in the Large Magellanic Cloud, a galaxy only 160,000 light years from Earth. The outburst was visible to the naked eye, and is the brightest known supernova in almost 400 years.
(Image: © X-ray: NASA/CXC/PSU/S.Park & D.Burrows.; Optical: NASA/STScI/CfA/P.Challis)

The model, detailed in the Feb. 23 issue of the journal Science, was announced on the 20th anniversary of the supernova's discovery.

Supernova 1987A, or just SN1987A, was the closest and brightest supernova observed in more than 400 years. It blazed as brightly as 100 million suns before gradually fading. The explosion occurred in the Large Magellanic Cloud, a dwarf galaxy only 160,000 light years away. It was first spotted on Feb. 23, 1987 and marked the first time modern astronomers could observe a star explosion in detail.

The discovery of three rings of gas [image] around SN1987 led astronomers to propose that the supernova resulted from the merger of two stars-one about 15 solar masses and the other about 5 solar masses-into a red supergiant. According to this scenario, the red supergiant eventually shrunk into a blue supergiant, called Sanduleak -69 202, or SK -69 for short, about 20,000 years ago before finally exploding. The entire process is thought to have taken a few hundred years.

This speculative theory is now bolstered by a new three-dimensional computer model which successfully recreated the star merger and the unusual three-ring nebula.

The model, developed by Thomas Morris and Philipp Podsiadlowski of the University of Oxford, suggests the triple rings were created by two minor explosions which occurred before SK -69 went supernova. One occurred during the initial merging of the two stars into a red supergiant.

"When the two stars merged, they released a lot of energy that ejected part of the [stellar] envelope, producing the two outer rings," Podsiadlowski told SPACE.com.

The second explosion occurred immediately after the red supergiant transitioned to a blue supergiant.

"In that phase, the star ejected material in the equatorial plane and this is what produced the inner ring," Podsiadlowski explained.

The researchers say their model is testable since it predicts mass and chemical differences between the three rings that could become apparent in future decades when debris from the supernova blast catches up with material in the ring [image].

"This process has already started," Podsiadlowski said in a telephone interview. "The ejecta will destroy the inner ring, and that will produce a lot of energy which will lighten up the nebula again."

Noam Soaker, an astronomer at the Technion Israel Institute of Technology who was not involved in the computer modeling, writes in an accompanying Science article that although the new "model has several advantages ... it cannot be considered as a general model for other similar objects, and it is not the last word on the formation of the rings of SN1987A."

Soaker points out that other stars, like those at the centers of Eta Carinae and the Red Rectangle, are likewise surrounded by strangely shaped nebulas but did not merge with their companion stars.

Nathan Smith, an astronomer at the University of California, Berkeley, recently proposed a different formation scenario for SN1987A. Smith proposed that the supernova's progenitor star belonged to a class of unstable blue supergiants, called luminous blue variables, that can go supernova without merging with other stars or going through a red supergiant phase.