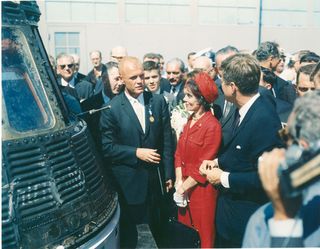 John Glenn, standing beside the Friendship 7 capsule in which he made his historic orbital flight of Feb. 20, 1962, meets with President John F. Kennedy. The astronaut’s wife, Annie, stands next to her husband.
(Image: © NASA)

John Glenn was the right man for a very important job.

On Feb. 20, 1962, Glenn looped around Earth three times in his Friendship 7 spacecraft, becoming the first American ever to orbit the planet. The historic flight put the United States on relatively equal footing with the Soviet Union in the space race, turned Glenn into a national hero and inspired countless kids across the nation to think that they, too, could be astronauts one day.

Much of that inspiration had to do with Glenn's friendliness and approachability, say those who knew the astronaut, who died Thursday (Dec. 8) at the age of 95. [John Glenn: An American Hero's Greatest Moments]

"What was really special about John Glenn, and the impact he made on the American self-image with the space program, was that he was one of us," said former NASA astronaut Stephen Robinson, who flew with Glenn on the STS-95 mission of the space shuttle Discovery in 1998.

"He seemed to be accessible and not distant; you could imagine him living down the street," Robinson told Space.com. "He made the space program something that we could all participate in, and I think he did that in a way that no one else ever did."

This was no small feat in the early 1960s, when "spaceflight seemed unimaginable, just absolutely science fiction," added Robinson, who chairs the mechanical and aerospace engineering department at the University of California, Davis.

On April 12, 1961, cosmonaut Yuri Gagarin became the first person ever to reach space, circling Earth once in his Vostok capsule. The mission padded the Soviet Union's lead in the Cold War space race, which kicked off with the nation's launch of the first-ever artificial satellite, Sputnik 1, in October 1957.

The United States lofted its first astronaut, Alan Shepard, on May 5, 1961. But Shepard reached only suborbital space on his 15-minute mission, as Gus Grissom did in July of that year with his flight. So it fell to Glenn — like Shepard and Grissom a member of the Mercury 7, NASA's inaugural astronaut class — to match Gagarin's accomplishment.

It took a lot of guts for Glenn to strap himself into his Friendship 7 capsule on that fateful day, said former NASA astronaut Leroy Chiao. Shepard and Grissom launched atop Mercury-Redstone rockets, whereas Glenn's flight used the less-proven Mercury-Atlas booster, Chiao pointed out. [In Photos: John Glenn, First American in Orbit]

"We didn't have all the bugs worked out," Chiao told Space.com. "There was certainly a lot more risk in flying the Atlas. We'd had several failures of the Atlas, so it was a big deal for John Glenn to get on top of that rocket, and for us to launch him into orbit."

Glenn, a decorated fighter pilot who flew many combat missions during World War II and the Korean War, was up to the challenge. His courageous flight helped lay the foundation for all that NASA has accomplished over the past 54 years, from the Apollo moon landings to the many robotic missions that have lifted the veil on Mars, Saturn, Pluto and other worlds throughout the solar system, NASA Administrator Charlie Bolden said.

"Senator Glenn's legacy is one of risk and accomplishment, of history created and duty to country carried out under great pressure with the whole world watching," Bolden said in a statement. "The entire NASA family will be forever grateful for his outstanding service, commitment and friendship."

Going back to space

For decades, it appeared that Glenn's historic 1962 flight would be his only trip to space. Indeed, he left NASA just two years later.

"I don't know first-hand, of course, but my understanding is that President Kennedy did not want to risk having John Glenn fly again and possibly losing him as an iconic American hero," said Chiao, who holds appointments at Rice University and the Baylor College of Medicine and is the special adviser for human spaceflight to the Space Foundation.

Chiao noted that both Gagarin and Yang Liwei, who in 2003 became China's first space traveler, were similarly limited to a single spaceflight. (However, Gagarin — who trained as an aviator, like Glenn, Yang and many other spacefarers — began flying jets again and died in a crash in 1968.)

After his astronaut career ended, Glenn made several forays into politics. He failed the first few times but broke through in 1974, joining the United States Congress as a senator from his home state of Ohio. Glenn served in this capacity for 25 years, retiring from the Senate in 1999.

While still a sitting senator, he signed on for his second spaceflight: the STS-95 mission of the space shuttle Discovery, which launched in October 1998, when Glenn was 77 years old.

He set several records on that mission — oldest person to reach space, for example, and longest time between space missions. But Glenn's participation was no stunt; NASA doctors wanted to investigate the effects of spaceflight on the elderly, and the aged astronaut took his job very seriously.

"It was a very intense mission; there was not a moment to spare in training, or the mission itself, or even after the mission," said Robinson, who served as STS-95's payload commander. "It was extremely busy, and he kept up with the pace, no problem."

STS-95 lasted nearly nine days, compared to a mere 5 hours for Glenn's Mercury mission of February 1962. There were other big differences between the two spaceflights as well.

"In Friendship 7, he was strapped in the whole time, so he could only do what his spacecraft did," Robinson said. "He didn't have a whole lot in the way of windows, either, whereas on the shuttle, you could float freely and move around, and you had your choice of a number of different windows. He said he really experienced the microgravity part of spaceflight [on STS-95] in a way that he never had before." [The Human Body in Space: 6 Weird Facts]

Robinson and Chiao both said that, growing up, they viewed Glenn as a hero; Robinson even dressed up as the famous astronaut for Halloween one year.

But Glenn didn't act the part of a man who literally had the world at his feet on two separate occasions. Chiao recalled him as friendly and outgoing, and Robinson lauded Glenn as "the definition of a gentleman."

"Here's a person who could easily have considered himself above most other people, but he never did that," said Robinson, who described Glenn as a close friend, as well as an adviser and a mentor. "He treated everyone the same — with respect and curiosity about what they thought. And, to me, that was the most inspirational thing of all about him."

The inspiration provided by Glenn has been far-reaching, said Robert Pearlman,editor of the space history website collectSPACE.com.

"His success, coupled with his devotion to public service and his triumphant second flight on the space shuttle, made him the rare breed of astronaut whose name has crossed over into popular culture," Pearlman told Space.com via email. "In life, Glenn served as a role model in the way he lived, the way he served his country and his passion for scientific research. In death, may he forever do the same."

Most of us never met John Glenn, so we know him only as a distillation of his achievements — the two history-making spaceflights, the combat decorations, the receipt of the Presidential Medal of Freedom (the highest civilian honor the United States can bestow). These highlights don't paint anything close to a complete picture of John Glenn, of course, but they speak volumes about the man's character, Robinson said.

"He wasn't a great man because of his accomplishments," he said. "He accomplished so much because he was a great man."