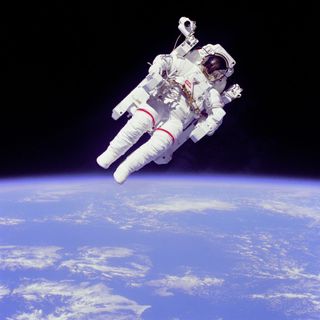 We know that there is sound on planets and moons in the solar system – places where there’s a medium through which sound waves can be transmitted, such as an atmosphere or an ocean. But what about empty space? You may have been told definitively that space is silent, maybe by your teacher or through the marketing of the movie Alien – “In space no one can hear you scream”. The common explanation for this is that space is a vacuum and so there’s no medium for sound to travel through.

But that isn’t exactly right. Space is never completely empty – there are a few particles and sound waves floating around. In fact, sound waves in the space around the Earth are very important to our continued technological existence. They also they sound pretty weird!

Fundamentally, sound waves are oscillations in pressure which travel through the medium that they’re in. In most cases, this is a series of compressions, where molecules are closer together, and rarefactions, where they are further apart – caused by the molecules themselves moving backwards and forwards. Here on the ground there is quite a lot of air around – each square centimetre of it contains 300,000,000,000,000,000,000 molecules. In contrast, in interplanetary space on average you’ll find just five protons (which make up the atomic nucleus with neutrons) in the same volume – almost completely empty in comparison … but not quite.

Notice how I say protons, because space (like 99.9% of the entire universe) isn’t filled with gas but with plasma: a different state of matter made of charged particles. These charged particles mean that plasma can have some different properties, for instance they can generate and be affected by electric and magnetic fields. These kinds of interactions can give rise to the plasma-equivalent of sound waves: magnetosonic waves. These too are pressure waves, but with some added magnetism.

We can’t hear these magnetosonic waves in space. That is because the pressure variations are so small at -100dB sound pressure level (the human hearing threshold is about +60dB). In fact, you’d need an eardrum comparable to the size of the Earth to hear them. Their ultra-low frequencies are also way below what we would be able to hear. So if we can’t hear them, why do we care about them?

Well, in Earth’s “magnetosphere” – the protective magnetic bubble we live in that largely protects us from various dangerous forms of space radiation – these magnetosonic waves can transfer energy around. For example, they can give it to the radiation belts, donuts of radiation surrounding the Earth, creating “killer electrons” at extreme energies that can damage our satellites if we’re not careful. This is why I study these waves – if we can predict when, where and why these waves occur in the space around the Earth, then we could forecast when our satellites might be in trouble and put them into a safe mode.

One of the ways we listen out for these sounds is using geostationary satellites which primarily monitor the weather. As well as all those instruments that can tell you whether to pack an umbrella, they have “magnetic microphones” which can detect these waves. The problem for scientists is separating out all the different types of sound that are present in space. Fortunately, it turns out the human auditory system is pretty good at this sort of thing, some have even called it the best pattern recognition software that we know of. For this very reason, I’m asking for you to lend me your ears.

By amplifying these space sounds and squashing them in time so a whole year becomes just six minutes, they can be made audible. The audio has been uploaded to Soundcloud where you can provide comments on what you think various bits of it sound like. There is so much going on in these sounds, but crowdsourcing comments on them will help identify different types of wave events and ultimately help with the scientific research. So have a listen to some pretty odd sounds from space, because only you can tell me what you hear.