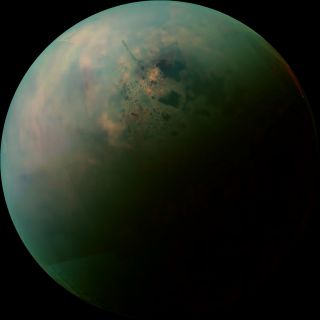 : This false-color mosaic, made from infrared data collected by NASA's Cassini spacecraft, reveals the differences in the composition of surface materials around methane and ethane lakes at Titan, Saturn's largest moon.
(Image: © NASA/JPL-Caltech/University of Arizona/University of Idaho)

On Sept. 27, 2017, the Cassini spacecraft will dive headlong into Saturn, after spending 13 years exploring the ringed planet and many of its moons. Right down to the last possible second of its life, Cassini will be working hard, sending back to Earth the closest images of Saturn ever captured.

But the funeral march hasn’t begun just yet. There's still a lot of work that the probe is scheduled to complete before September, including an additional, close flyby of Saturn's largest moon, Titan. By the end of its life, Cassini will have made over 125 close passes of the alien moon, which bears a slightly eerie resemblance to Earth.

Why do scientists keep going back to Titan? Besides the pure pursuit of understanding an alien world, studying Titan's complex atmosphere can actually help scientists better understand Earth's atmosphere. And it's possible that even though life as we know it on Earth could never form on Titan, this moon may still have something to teach scientists about the likelihood of life arising elsewhere in the universe. [Titan, Largest Moon of Saturn, Explained (Infographic)]

If an Earthling were to touch down on the rocky surface of Titan, that person might think that they'd found an analogue to the early Earth. While there is no vegetation or other life to be seen, the rocky surface is dotted with lakes, rivers and oceans. In fact, Titan is the only body in the solar system besides Earth that has substantial amounts of liquid on its surface.

Of course, the liquid on Titan isn't water — that would be impossible, considering that surface temperatures hover around minus 290 degrees Fahrenheit (minus 179 Celsius). Instead, all those oceans, lakes and rivers are full of liquid methane, with trace amounts of ethane. (However, there is firm evidence that there is a very salty liquid-water ocean below Titan's rocky crust, according to NASA.)

The fact that life as we know it could never form on the surface of Titan is a pretty major difference between it and Earth, and yet the similarities continue to stack up. Titan has an atmosphere that's made of about 95 percent nitrogen (Earth's atmosphere is about 78 percent nitrogen), and it hosts a methane cycle that's similar to Earth's water cycle: The surface liquid is absorbed into the atmosphere and into clouds, where it becomes rain that falls down onto the surface, beginning the cycle over again.

"Titan has been one of the most exciting and unique objects in the solar system that we've been able to explore with Cassini," said Athena Coustenis, a director of research with the National Centre for Scientific Research (CNRS) at the Paris-Meudon Observatory. Coustenis spoke about Cassini's study of Titan during a press conference at a meeting of the American Astronomical Society (AAS) in October.

This isn't the first alien atmosphere to teach Earth scientists something about their home planet; studies of Venus in the 70s and 80s allowed scientists to "test whether we really understood the carbon dioxide greenhouse effect," Lunine told Space.com. For example, scientists can adapt their models of Earth's atmosphere to the conditions on Venus, and see if the mechanisms those models described still work.

"And of course, there are therefore some applications to climate change on the Earth, because these same types of models are used to predict how our own atmosphere is changing … as we change it chemically," he said. [Epic Landing on Saturn's Moon Titan Remembered 10 Years Later]

Titan may also experience cycles in which the liquid methane on the surface shifts from pole to pole over timescales that are on the order of 100,000 years, Lunine said — a process that's similar to glacial cycles on Earth.

"To understand that oscillation, which is maybe a primary feature of Titan, we really need to understand how the atmosphere works seasonally, because we can then extend that to these longer-term cycles of methane moving from the north to the south pole," he said.

On Nov. 13, Cassini made a flyby of Titan with the goal of imaging waves on the surface of Titan's ocean. Models of Titan's atmosphere predict that the wind will pick up with the arrival of summer, thus increasing the size and frequency of waves on the methane sea. So studying the waves is an indirect way to study features of the wind.

In order to get a look at those waves, the probe fired a radio signal at the surface of Titan's ocean, but at an angle greater than 90 degrees. Assuming everything went according to plan, that caused the radio signal to ricochet out into space on a trajectory with Earth. Cassini also executed this technique in 2014, but the maneuver is still extremely impressive. Lunine said that it would be like bouncing a ball off a wall at just the right angle, such that it bounces toward another person who is standing 1,000 miles away.

Life, not as we know it

The Cassini probe wasn't built with the capability to detect the presence of life-forms on a distant moon. But it is laying the groundwork for future missions that will search for life.

Titan has no liquid water, and that more or less eliminates the possibility that it hosts life — or at least, life as we know it. But Titan's complex chemistry is still of interest to scientists who are searching for life elsewhere, according to both Coustenis and Lunine.

The polar vortex that Cassini observed forming over the southern hemisphere as that region plunges into winter is significant, because it can promote the formation of rare and complex chemicals, Coustenis said. Molecules that are typically destroyed by incoming UV radiation are now under a kind of natural umbrella.

"I'm talking orders of magnitude increase in many of these constituents," she said at the AAS meeting. "The south polar region is becoming a huge reservoir of enhanced material, in terms of gases, but also condensates — little icy particles — in the atmosphere of Titan."

"It's amazing that this strong difference with the south pole going into winter has come on so quickly. We expected to see this enhancement. What we didn't expect was for this to come on within months after we went past the equinox," Coustenis said. "[Now] we want to go and look for more complex organics. We want to understand how complicated is this organic chemistry in Titan's atmosphere."

It's possible that Titan could play host to complex molecules similar to those that likely formed the foundation for life on Earth. Scientists would be looking for "very organized chemistry" that "produces that same molecular set over and over again, and by drawing material and energy from the environment," he said.

"Can that happen in liquids other than liquid water? Does it have to be liquid water, or could it be something as different as liquid methane?" he said. "Some people say that’s preposterous, it's too cold or it's not the right stuff. But the history of science is replete with people saying 'that’s ridiculous,' and then someone finds that the idea really wasn't ridiculous. The only way we'll know is to sample the sea."

Lunine was part of a team that pitched a mission proposal to NASA to send a probe to Titan that would splash down in its northern sea and look for this type of chemistry. The mission wasn't approved, but Lunine is confident that some kind of life-sampling probe will go there someday. (The Huygens probe, which traveled to Saturn with Cassini, landed on Titan, but was not equipped to answer these kinds of questions.) Such a mission would be part of what scientists hope are a suite of future missions to study the potentially life-supporting environments on some of the moons around Saturn and Jupiter.

Saturn's moon Enceladus also hosts an underwater ocean and is spraying samples of that ocean up into space through geysers on its icy surface. Cassini has flown through those geysers and has found organic compounds (those that contain carbon, the backbone of life on Earth).

Jupiter's moon Europa is the focus of a mission that is set to launch in the 2020s (Cassini made a flyby of Europa in 2001, on its way to Saturn). Beneath this alien moon's icy outer shell lies a liquid-water ocean with twice the total volume of all Earth's oceans. In addition, evidence suggests that there could be sources of heat and nutrients in that ocean, and that means there's the possibility that life could form there. Those life-forms would live in an environment that's not unlike Earth's ocean floor, where life has been found to be surviving on the heat and nutrients provided by undersea vents.

"So Europa and Enceladus tell us about whether life can begin anywhere in an Earth-like environment. If you've got liquid water and nutrients, do you get life, or is something else missing?" Lunine said. "And Titan tells us about whether life more generally can begin in any kind of liquid medium that has sources of energy and has organics. We have to explore all three."

In the meantime, scientists are still analyzing the data from the two most recent Titan flybys. And for more information, researchers can still mine the data that Cassini has sent back. For example, a study that was released last August provided a new analysis of data from a Cassini flyby that took place in 2013, and revealed canyons etched into the rocky surface of Titan — some of them flooded with liquid. [How Humans Could Live on Saturn's Moon Titan (Infographic)]

"It's such a huge amount of data, that I think at least three generations of astronomers coming will be able to analyze and work on that wealth of data in the coming years," Coustenis said at the AAS meeting.

On Nov. 29, Cassini did another close flyby of Titan, capturing more images of its north pole so scientists can look for more changes that may have occurred there. The probe also measured the temperature of the moon's surface.