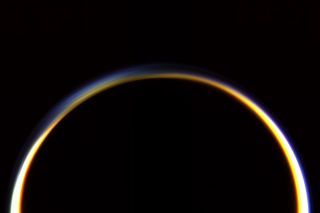 Saturn's moon Titan was already known to have similarities with Earth: a thick atmosphere, a rocky surface, lakes and rivers. Now, new data show that it also shares a peculiar effect that draws gases out of the atmosphere and into space. This photograph of Titan's atmosphere was taken by the Cassini space probe.
(Image: © NASA/JPL/Space Science Institute, Processed by Kevin M. Gill)

In our solar system, the objects with rainfall, rivers and oceans can be counted on two fingers: Earth, and Saturn's moon Titan. Both also share a thick atmosphere, rocky ground and plate tectonics, and now, they have one more thing in common: polar wind that pulls gases from their atmospheres right out into space.

Saturn's largest moon, Titan, is the first known planetary body besides Earth to have such a peculiar polar wind. NASA's Cassini orbiter, which has been investigating Saturn since 2004, measured evidence of the effect as it flew through Titan's atmosphere and magnetic tail over the course of 23 flybys.

"Titan's atmosphere is made up mainly of nitrogen and methane, with 50 percent higher pressure at its surface than on Earth," Andrew Coates, of University College London Mullard Space Science Laboratory, who led the study, said in a statement. "Data from CAPS proved a few years ago that the top of Titan's atmosphere is losing about seven tonnes of hydrocarbons and nitriles every day, but didn't explain why this was happening. Our new study provides evidence for why this is happening."

That evidence came in the form of electrons with a specific energy — 24.1 electron volts — that the researchers knew would have come from a particle's interaction with light.

"Although Titan is 10 times further from the sun than Earth is, its upper atmosphere is still bathed in light," Coats said in the statement. "When the light hits molecules in Titan's ionosphere, it ejects negatively charged electrons out of the hydrocarbon and nitrile molecules, leaving a positively charged particle behind."

The newly created electrons are then drawn away along Saturn's magnetic field and form their own electrical field, which is strong enough to pull the positively charged particles up and out of the atmosphere, Mullard Space Science Laboratory researchers said in the statement.

On Earth, the same effect charges particles in the atmosphere and draws them up along the planet's magnetic field, where they can escape at the poles. Although Titan is the only other object in the solar system known to share this property, the researchers suggested that these particle escapes likely are happening on Mars and Venus as well.

The research is detailed in the June 18 edition of the journal Geophysical Research Letters.