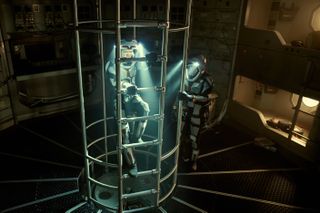 The third episode of the National Geographic series "Mars" airs tonight and will explore the challenge of building a long-term home on Mars.

The six-part series is a combination of science fiction and science fact, consisting primarily of a scripted drama about the first human mission to Mars, set in 2033. But the drama is interspersed with documentary segments that explore real science taking place in 2016 that is contributing to a future human mission to the Red Planet.

In the third episode, the astronauts are looking for a place to deploy a domed habitat that will serve as their long-term home on Mars. But not just any spot will do: They need to find a location that is protected from harsh space radiation, and one that has nearby ice deposits that the explorers can turn into water. ['Mars': The Epic National Geographic Channel Miniseries in Pictures]

On Earth, the planet's atmosphere and magnetic field protect humans and other life-forms from space radiation. Mars has a much weaker magnetic field and much thinner atmosphere than Earth, though, so Martian settlers will receive a higher dose of radiation from the sun and from sources outside the solar system. The same goes for astronauts on the International Space Station.

Creating an artificial radiation shield that is equivalent to the natural shield produced by the Earth is difficult. Not even the walls of the station fully protect the astronauts on board. Sending radiation shielding from Earth to Mars would be costly, and it would inhibit the kind of structure that could be built (although there are people working on designs for portable radiation shelters).

In the face of those challenges, scientists are considering using natural radiation shielding in the form of lava tubes. As the name suggests, these are hollow areas where lava once flowed, and satellite missions have identified the structures on Mars. The largest examples of these natural cave-like structures are 3,000 feet (900 meters) wide. (Lava tubes can be found in young volcanic regions on Earth, as well.)

During Episode 3 of "Mars," the astronauts are searching for a lava tube where they can deploy their habitat and begin an official human colony on the Red Planet. But they're working against a countdown: Their temporary habitat has limited resources, and finding a lava tube that fits all their needs proves exceptionally difficult.

The show takes this opportunity to highlight the importance of sending robotic missions to Mars ahead of humans. Every such mission that has ever attempted to reach the Red Planet has laid down another stone on the path that humans will eventually take to get to Mars. Orbital missions are starting to map the surface of the planet in high resolution, which will provide scientists with a better idea of where on Mars humans should try to land, and what resources will be available. These missions have also shown that Mars is not a static planet; it has an active surface, and humans will have to battle those elements just like humans on Earth battle the weather.

The episode also discusses the most recent robotic Mars mission, a joint venture between Russia and the European Space Agency called ExoMars, which was a partial success. The spacecraft consisted of both an orbiting probe and a lander. The orbiter was successful and is now sending back high-resolution color images of the Martian surface. The rover's landing system didn't operate as planned, however, and it crashed to the surface.

Though benefiting from a history of such robotic missions, the explorers in "Mars" face plenty of challenges in Episode 3. At this point in their fictional journey, the astronauts are also dealing with the psychological stresses of a mission to Mars. That's a key concern of many "mock Mars" studies (or Mars simulation studies), which attempt to replicate the conditions of a long-duration space mission with a simulation on Earth. These missions study group cohesion and test ways for astronauts to alleviate stress, depression and conflict.

The "Mars" series doesn't have to dig deep to find drama, because the first human crew to the Red Planet will face plenty of obstacles. But the third episode also emphasizes that there will always be humans who are willing to bear the risk of stretching out into space, even when the challenges seem impossible to overcome.