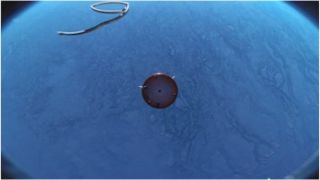 Researchers have reported results from the first optical clock ever to fly in space. Here, a view of Earth from the research rocket it rode on shows the detachment of the final booster, when the clock began to run in microgravity.
(Image: © Airbus Defense & Space GmbH)

Researchers have tested optical clock technology in space for the first time, showing that the extremely precise technology could find a use in space-based applications.

Optical clocks on Earth can split time more finely than any previous clocks, and in space, they could be useful as reference points for GPS, coordinating satellites and probing fundamental physics.

The clock's delicate frequency-comb technology withstood a sounding rocket's launch and hung in space for 6 minutes on a German Space Agency microgravity research platform before falling back to Earth. [5 of the Most Precise Clocks Ever Made]

The most advanced optical clocks keep time even more accurately than the atomic clocks that officially define the second, to within 1 second in tens of billions of years. However, the mechanism that makes them work has been too unwieldy and fragile to use in space. The new work tested whether an optical clock's hardware could survive the journey.

"Why do we do this on a rocket, or in microgravity? We do it because we are looking for ways to bring extremely precise clocks into space, where they can be used as references," Matthias Lezius, a researcher at Menlo Systems GmbH in Germany and first author on the paper, told Space.com. "For example, for future global navigation systems, for precision metrology, for distance measurements."

The historic flight was in April 2015, and the paper detailing its results was published Thursday (Nov. 17) in the journal Optica.

Optical clocks and atomic clocks both work by measuring atoms as they oscillate back and forth after being exposed to radiation, jumping from one energy state to another and back. Optical clocks operate at a much higher frequency — visible light rather than microwave — and thus "tick" much faster than atomic clocks. The frequency comb generates laser light precisely at millions of different wavelengths, Lezius said, and acts as a "gear" to translate that oscillation down to a frequency that can be measured electronically.

How to Build the Most Accurate Atomic Clocks | Video

Optical clocks and frequency combs have been improving rapidly because of advances in building more portable and powerful lasers, as well as andvances in laser spectroscopy, Lezius said.

Lezius' team reduced the size of the frequency comb and shielded it in protective silicon rubber for its journey. The goal of this particular experiment — beyond just proving the viability of using frequency combs in space — was to explore the limits of general relativity, and the point at which gravity affects the processes within an atom. The research compared time on an atomic clock, which operates at lower frequencies, with that on the optical clock, and found that there was no difference between the two. The experiment didn't return the desired level of accuracy, but the researchers plan to relaunch it with a more accurate reference clock and other adjustments, Lezius said. Plus, they'll be able to work to decrease the frequency comb's weight from its current 44 lbs (20 kilograms).

"There are still ways to make it smaller," Lezius said. "It was a first shot, and we are already building a smaller device and will have another flight, scheduled for November next year." The new flight would leave the comb in vacuum conditions and would be further shielded by radiation, representitives of theOptical Society, which produces the journal Optica, said in a statement.

As the technology develops, it will become more useful for extremely precise GPS positioning, satellite navigation and measurements of gravity (and even gravitational waves) in space; the frequency comb itself can also be used to accurately measure carbon dioxide in the atmosphere and discern qualities of planets orbiting faraway stars by precisely measuring the light coming back.

"We think that it's not so far away that such clocks will be space-qualified to fly on satellites," Lezius said.