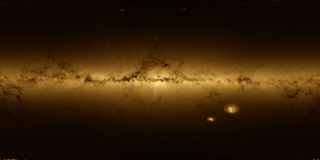 ESA launched the Gaia spacecraft in 2013 to make the most precise 3D map of stars in the Milky Way, as well as a map of its neighbors' stars – the Large and Small Magellanic Clouds. Earlier this year, ESA scientists unveiled Gaia's first billion-star map of the Milky Way. On Thursday (Nov. 10), the space agency also released this new virtual map based on data from the spacecraft. [Gaia's Milky Way Mapping Mission in Pictures]

"These engineering data have been accumulated over 18 months and combined to create a 'map' of the observed star densities, from which a beautiful and ghostly virtual image of our magnificent Milky Way galaxy can be discerned, showing the attendant globular clusters and Magellanic clouds," ESA officials wrote in an image description. "Where there are more stars, as in the Galactic center, the map is brighter; where there are fewer, the map is darker. The map includes brightness data corresponding to several million stars," they wrote in the same description.

The $1 billion (740 million euros) Gaia spacecraft is designed to create a high-resolution map of 1 billion stars in the Milky Way over the course of a five-year mission. The spacecraft is making its observations from a gravitationally stable point, called the sun-Earth Lagrange Point 2, or L2, about 930,000 miles (1.5 million kilometers) from Earth.

You can find out more about the Gaia mission in our mission video here.