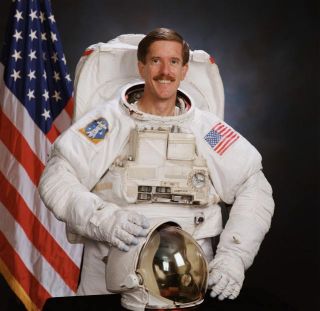 EXPERIENCE: After receiving his Bachelor ofScience degree in 1977, Reilly entered graduate school and was selected toparticipate as a research scientist specializing in stable isotopegeochronology as part of the 1977-1978 scientific expedition to Marie ByrdLand, West Antarctica.

Concurrent with his duties as an explorationgeologist, he was actively involved in the application of new imagingtechnology for industrial applications in deep water engineering projects andbiological research. As part of this work, Reilly has spent approximately 22days in deep submergence vehicles operated by Harbor Branch OceanographicInstitution and the US Navy.

NASA EXPERIENCE: Selected by NASA in December 1994, Reilly reported tothe Johnson Space Center in March 1995, has completed a year of training andevaluation, and is qualified for flight assignment as a mission specialist.

Initially,he was assigned to work technical issues for the Astronaut Office ComputerSupport Branch. Reilly flew on STS-89 in 1998 and STS-104in 2001. He has logged over 517 hours in space, including 3 spacewalkstotaling 16 hours and 30 minutes. Reilly was next assigned as the AstronautOffice lead on Shuttle training.

Currently, he is assigned to the crewof STS-117. Concurrent with his crew assignment he is designated asPayloads and Procedures Operations lead for the Astronaut Office ISS Branch.

SPACE FLIGHT EXPERIENCE: STS-89 (January 22-31, 1998) wasthe eighth Shuttle-Mir dockingmission during which the crew transferred more than 9,000 pounds of scientificequipment, logistical hardware and water from Space Shuttle Endeavour to Mir. In the fifth and lastexchange of a U.S. astronaut, STS-89 delivered Andy Thomas to Mir and returned with David Wolf. Mission duration was 8 days, 19 hours and 47 seconds, traveling 3.6 million miles in 138orbits of the Earth.

STS-104(July 12-24, 2001) was the ninth assembly flight of the Shuttle to the International SpaceStation (ISS). Flight 7A delivered and installed the joint airlock moduleto complete the second phase of ISS assembly. Three EVAs were conducted duringthe mission with the third being the inauguralspacewalk from the joint airlock. Mission duration was 12 days, 18 hoursand 35 minutes traveling 5.3 million miles in 200 orbits of the Earth.