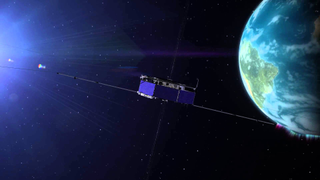 The four MMS satellites set the new space record by using GPS navigation at an altitude of 43,500 miles (70,000 kilometers) above Earth's surface. The satellites use GPS, which is a navigation system that pinpoints locations by checking in with devoted satellites in orbit, to stay in a tight flying formation as they survey Earth's magnetic field.

This isn't the only time that MMS broke a record. Previously, it managed the closest flying formation between several spacecraft, with only 4.5 miles (7.24 km) separating the four satellites. [NASA's Magnetospheric Multiscale Mission in Pictures]

MMS are also the fastest-traveling craft to use a GPS receiver, reaching 22,000 mph (35,405 km/h) when the mission is at its closest point to Earth along its orbit.

"The mission uses four individual satellites that fly in a pyramid formation to map magnetic reconnection — a process that occurs as the sun and Earth's magnetic fields interact," officials from NASA's Goddard Space Flight Center said in a statement. "Precise GPS tracking allows the satellites to maintain a tight formation and obtain high resolution three-dimensional observations."

The satellites will go to a higher orbit to look at a different region of the magnetosphere in spring, beginning Phase 2 of the mission. During that stage, the satellites are expected to at least double the GPS record they set, officials said.