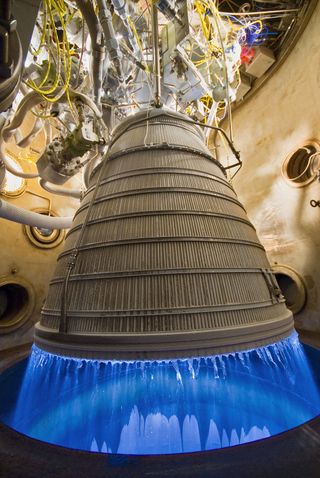 What could be mistaken for a futuristic water cannon is actually a piece of technology developed more than 50 years ago that is destined to help launch NASA's next megarocket, the Space Launch System.

The RL10, a rocket engine developed in the 1950s by Pratt & Whitney, flew first in 1963. This engine has traveled to each planet in our solar system, powering spacecraft such as Voyager 1  — the first to reach interstellar space.

The RL10 rocket engine out-performs all other current engines and has over half a century of performance and documented reliability to its name. With more than 400 flights, over 15,000 hot fires on record and more than 2.3 million seconds of hot fire operation time with a greater than 0.999 demonstrated reliability during its use, the RL10 has earned its place in history. [The World's Tallest Rockets: How They Stack Up]

Because of its stellar record and its technically mature design, this rocket engine will make its way from the history books into the future of human spaceflight.

NASA's new Space Launch System, or SLS for short, will utilize this upper stage engine to launch an Orion spacecraft in the latter part of 2018 as well as eventually sending astronauts beyond the moon. Aerojet Rocketdyne of West Palm Beach, Florida will produce several RL10C-3 engines for NASA, powering its several planned deep space missions, with the ultimate goal being NASA's Journey to Mars.

According to James Burnum, NASA SLS Liquid Engines RL10 manager, "Engines are one of the most complex rocket elements … We need a reliable engine with a proven track record that has the performance to power humans to deep space."