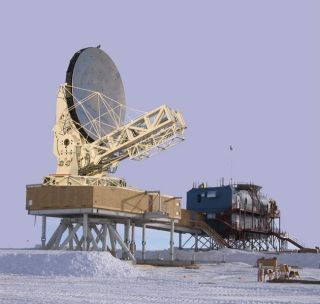 The new South Pole Telescope (SPT) has successfully collected its first light as part of a long-term project to unravel one of the biggest mysteries in cosmology, researchers announced today.

The goal of SPT is to learn the nature of mysterious dark energy, an antigravity force that permeates the cosmos and is driving the universe apart at an ever-increasing pace.

The telescope does not make conventional images. Instead, it will take advantage of excellent viewing conditions-cold and dry-in Antarctica to detect the cosmic microwave background (CMB) radiation. The CMB is said to be the afterglow of the Big Bang.

On the electromagnetic spectrum, the CMB falls somewhere between heat radiation (infrared) and radio waves.

The CMB is largely uniform, but it contains tiny ripples of varying density and temperature. These ripples reflect the seeds that, through gravitational attraction, grew into the galaxies and galaxy clusters visible to astronomers today.

The CMB was imaged in unprecedented detail by the WMAP space telescope, helping to pin down the age of the universe at 13.7 billion years.

Now scientists are eager to get more detailed data.

SPT will record small variations in the CMB to determine if dark energy began to affect the formation of galaxy clusters by fighting against gravity over the past few billion years.

Galaxy clusters are groups of galaxies, the largest celestial bodies that gravity can hold together.

"Our galaxy, the Milky Way, is in one of these clusters," said Stephan Meyer of the University of Chicago. "And these clusters of galaxies actually change with time."

The CMB allows astronomers to take snapshots of the infant universe, when it was only 400,000 years old. No stars or galaxies had yet formed. If dark energy changed the way the universe expanded, it would have left its "fingerprints" in the way it forced galaxies apart over the deep history of time. Different causes would produce a different pattern in the formation of galaxy clusters.

According to one idea, dark energy is Albert Einstein's cosmological constant: a steady force of nature operating at all times and in all places. Einstein introduced the cosmological constant into his theory of general relativity to accommodate a stationary universe, the dominant idea of the day. If Einstein's idea is correct, scientists will find that dark energy was much less influential in the universe 5 billion years ago than it is today.

"Clusters weren't around in the early universe. They took a long time to evolve," said SPT project leader John Carlstrom of the University of Chicago.

Another version of the dark energy theory, called quintessence, suggests a force that varies in time and space. Some scientists even suggest there is no dark energy at all, and that gravity merely breaks down on vast intergalactic scales.

To pinpoint when dark energy became important, SPT will use a phenomenon called the Sunyaev-Zeldovich effect, which distorts the CMB as it passes through the hot gas of intervening galaxy clusters. As the microwaves interact with gas in the clusters, some of the microwaves get kicked into a higher frequency. SPT will measure the slight temperature difference associated with the frequency change and produce an image of the gas in the cluster.

SPT [image] can scan large regions of the sky quickly. Scientists expect it to detect thousands, or even tens of thousands of galaxy clusters within a few years.

The $19.2 million telescope is funded primarily by the National Science Foundation (NSF), with additional support from the Kavli Foundation of Oxnard, Calif., and the Gordon and Betty Moore Foundation of San Francisco.