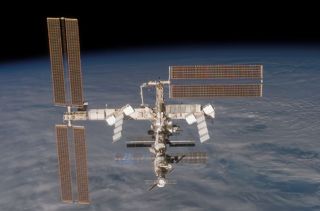 The current lopsided look of the International Space Station as seen by Discovery shuttle astronauts during their STS-116 mission in December 2006. The P4 solar arrays can be seen at left.
(Image: © NASA.)

NASA engineers are pondering the source ofa day-long power loss aboard the International SpaceStation (ISS) Sunday that temporarily shut down science and communicationsequipment.

At 1:00 a.m. EST (0600GMT) Sunday, a power channel in the station'sPort 4 (P4) solar array electrical system shut down due to a glitch with anelectrical distribution device known as a direct current switching unit, NASAofficials said [image].

"The station's three crewmembers were not in any danger, but it did turn an off-duty day into a fullwork shift," the space agency said in a statement.

The power drop led to atemporary loss of ISS communications and the shutdown of heating units, somescience equipment and one of three operating U.S. gyroscopes used for attitudecontrol.

"Flight controllersrestored power to nearly all affected systems and equipment by Monday morning,"NASA officials said. "They are still investigating what caused the glitch, butbelieve it was an isolated event."

"I wanted tocongratulate you on a really well done job," Expedition 14 commander MichaelLopez-Alegria told flight controllers in a messagerebroadcast on NASA TV after power was restored. "Hats off toyou guys and thanks."

The ISS did fly in atwo-gyroscope mode for attitude control, the minimum required to orient thestation without consuming propellant for Russian thrusters, during the glitch.The space station has a total of four 620-pound (281-kilogram) ControlMoment Gyroscopes, though one - CMG-3 - was powereddown in October due to excessive vibration.

At no point did the ISSexperience any loss of attitude control during the power loss, NASA said.

Deliveredto the ISS in September2006, the P4 solararrays are the newest power-generating components aboard the orbitallaboratory, and beganfeeding station systems in December during NASA's STS-116shuttle flight to the orbital laboratory.

The arrays consist oftwo solar wings that reach out in opposite directions from their base on the P4truss for a total wingspan of about 240 feet (73 meters). The arrays rotate totrack the Sun and route electrical powerthrough direct current switching units to the station's main bus switchingunits for distribution to ISS systems.

Each of the two P4 solarwings is designed to produce about 32.8 kilowatts of direct current power andtogether generate enough electricity to supply about 30 non-air conditionshomes, according to a NASA description.

An older solar arraysegment, the Port6 power module, currently extends above the ISS from atop the outpost'sUnity node. Only one of that segment's two solar wings - the starboard array -is deployed. The port-reaching array was retracted during the STS-116 mission.

NASA's next shuttlemission - STS-117aboard Atlantis - is slated to launch on March 15 to deliver the third offour solar arrays, part of its Starboard 3/Starboard 4 (S3/S4) payload, to theISS.