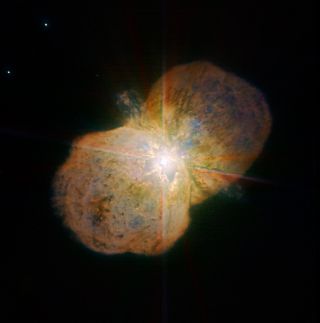 See the highest-resolution views yet of the explosive star system Eta Carinae, which is 7,500 light-years from Earth in the constellation Carina. The latest HD views were captured by the European Southern Observatory in Chile. You can read our full story here. This mosaic shows the Carina Nebula, highlighting the Homunculus Nebula and the Eta Carina star system in great detail. The Very Large Telescope Interferometer allowed astronomers to see new and unexpected areas within the binary system, even getting the best image ever of the two stars. [Full Story: Explosive Star System's Turbulent Relationship Revealed in Best View Yet]

Using the Very Large Telescope, the team of astronomers captured the best yet image of the binary star system known as Eta Carinae.

The Digitized Sky Survey 2 created this color composite of the Eta Carina Nebula from multiple exposures.

This sky map reveals the location of the Carina Nebula in the constellation Carina (The Keel). The map shows stars visible to the naked eye and delineates the nebula with a green square — it is quite bright and can be seen with small telescopes.

Stunning Panorama of Eta Carina in the Carina Nebula

A new perspective of the field around the Wolf-Rayet star WR 22 in the Carina Nebula combined with a previously imaged section of the Eta Carinae star, a composite of images from the Wild Field Imager from ESO's La Silla Observatory in Chile.

So Much to See

Taken from ESO's Paranal Observatory in Chile, the photographer captured so many amazing astronomical objects. From the innumerable stars to the telescopes of the Very Large Telescope Interferometer, both natural and manmade objects are featured. Stunningly centered in the image Carina Nebula burns with a red severity.

The Very Large Telescope delivers the Carina Nebula, a sensational specimen of a star factory, in phenomenal detail. Sebastián Piñera, President of Chile, aided in the capturing of this image during his June 2012 visit to the site.

The NACO near-infrared adaptive optics instrument on ESO's VLT produced an unbelievable amount of detail in this new image of Eta Carinae and the lobes of material around it called the Homunculus Nebula. The bipolar structure and jets emanating from the central star are clear.