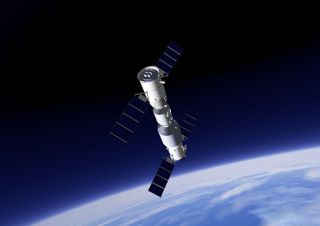 A Chinese spacecraft carrying two astronauts has successfully docked with the uncrewed Tiangong-2 space lab, according to Chinese media reports.

Jing and Chen will soon enter Tiangong-2, then stay aboard the orbiting lab for 30 days. The duo are undertaking China's longest-ever crewed space mission; they lifted off on Sunday (Oct. 16) and will be in orbit for a total of 33 days if all goes according to plan, Xinhua reported.

The 34-foot-long (10.4 meters) Tiangong-2 launched to orbit on Sept. 15. The 9.5-ton module is China's second-ever space lab; the first, Tiangong-1, reached space in September 2011 and hosted three dockings — two of them involving crewed Shenzhou spacecraft — before ending its operational life this past March.

Tiangong-1 will likely fall to Earth in late 2017, Chinese space officials have said.

The Tiangong program is designed to test out the rendezvous and docking technologies that China will need to build a bona fide space station, which the nation aims to have up and running by the early 2020s.

China's space station will likely be considerably smaller than the 440-ton, $100 billion International Space Station; various reports have estimated that China's orbiting complex will tip the scales at about 60 tons.

Shenzhou-11 is China's first crewed spaceflight in more than three years. The most recent such effort, Shenzhou-10, sent three astronauts to Tiangong-1 in June 2013. The Shenzhou-10 crewmembers spent 14 days in space — the Chinese spaceflight record that Jing and Chen are poised to break.