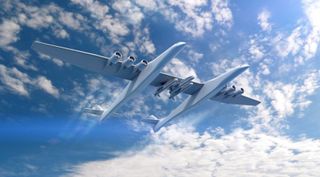 WASHINGTON — Stratolaunch Systems will use the giant aircraft the company is currently developing to launch Pegasus rockets from Orbital ATK as part of a "multi-year" partnership, the two companies announced Oct. 6.

The companies declined to release details of agreement, including how many Pegasus vehicles Orbital ATK will provide or over what time period. A Vulcan Aerospace spokesperson said the company remains "committed to being fully operational by the end of the decade." [See images of the giant Stratolaunch plane]

The announcement suggested the Pegasus XL deal was the first step in a larger partnership between the companies, although the companies did not disclose details about further cooperation. "Orbital ATK is excited by this collaboration and sees it as a positive first step in a long-term partnership," Scott Lehr, president of Orbital ATK's Flight Systems Group, said in a statement. Both companies declined to elaborate on what future steps in the partnership might include.

The two companies had previously collaborated on a much larger rocket concept, called Thunderbolt, which would also be flown from Stratolaunch's plane. That vehicle would have used solid-propellant lower stages provided by Orbital ATK and an upper stage powered by an Aerojet Rocketdyne RL10 engine.

Stratolaunch quietly shelved that effort, though, and indicated since last year it was looking an various options for a smaller vehicle better suited to the growing smallsat launch market. The company had not made any announcements about vehicle selections prior to the Orbital ATK announcement.

"Orbital ATK is the world's most experienced air-launch service provider, and we are proud to leverage that expertise and progressive approach in pursuit of our shared goal of convenient and affordable commercial access to low Earth orbit," said Jean Floyd, chief executive of Stratolaunch Systems and a former Orbital executive whose duties there included managing the Pegasus program, in the statement.

Beames said during a June media tour of Stratolaunch's Mojave, California, facility where its aircraft is being assembled that the company was considering multiple launch partners. That is still on the table, according to a Vulcan spokesperson. "We're continuing to explore opportunities with potential partners and customers who are interested in our Stratolaunch aircraft."

For Orbital ATK, the deal gives new life to the Pegasus XL, a vehicle that has won little business in recent years beyond contracts for NASA missions despite a broader surge in interest in small satellites. Pegasus last flew in June 2013, placing NASA's Interface Region Imaging Spectrograph spacecraft into orbit. It's scheduled to launch NASA's Cyclone Global Navigation Satellite System (CYGNSS), a group of eight small weather satellites, in November.

CYGNSS and NASA's Ionospheric Connection Explorer, scheduled for launch in mid-2017, are the only missions currently on the Pegasus manifest. Orbital ATK spokeswoman Trina Helquist said the company will continue to offer Pegasus XL launches from the L-1011 aircraft for NASA, while also seeking additional customers for launches from Stratolaunch's aircraft. "We will provide cost synergies to NASA if Vulcan orders higher quantities, so it should be advantageous for all parties," she said.