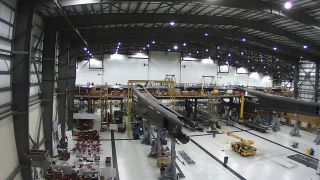 Inside Stratolaunch Systems' hangar in Mojave, California, where the company's huge carrier aircraft is coming together.
(Image: © Vulcan Aerospace)

Vulcan Aerospace, which was unveiled Monday (April 13), will spearhead the space projects of Vulcan, Inc., a company Allen and his sister Jody formed in 1986.

"Vulcan Aerospace is the company within Vulcan that plans and executes projects to shift how the world conceptualizes space travel through cost reduction and on‐demand access," Vulcan Aerospace president Chuck Beames and his colleague Kyu Hwang wrote in a paper describing the company that was presented at the 31 st Space Symposium in Colorado Springs this week.

"Vulcan Aerospace has its heritage in SpaceShipOne and oversees the Stratolaunch Systems project," they added. "Additionally, Vulcan Aerospace collaborates across Vulcan Inc. for projects dealing with space."

SpaceShipOne won the $10 million Ansari X Prize in 2004 for becoming the first privately funded manned vehicle to reach space twice in the span of two weeks. The project was a joint venture involving Allen and Scaled Composites, the California-based aerospace firm headed by engineer Burt Rutan.

Allen, who co-founded Microsoft with Bill Gates, teamed up with Rutan again in 2011 to form Stratolaunch Systems, a company that aims to launch satellites from the belly of a huge carrier aircraft with a wingspan of 385 feet (117 meters).

"Stratolaunch’s ability to launch from variable locations will enable satellites and humans to be efficiently inserted into their most optimal orbit at a time of the customer’s choosing," Beames and Hwang wrote. "Launching far away from populated areas (i.e. middle of the ocean) also significantly reduces public safety risk. Flexibility will be greater when the Stratolaunch system is adapted to launch various types of launch vehicles. The carrier vehicle is being developed by Scaled Composites and the launch vehicle by Vulcan Aerospace."

The Stratolaunch carrier plane is on track to make its first test flight in 2016, according to Beames.