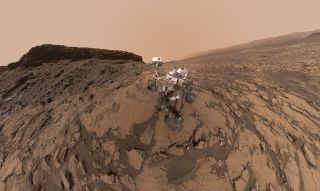 This September 2016 self-portrait of NASA's Curiosity Mars rover shows the vehicle at the "Quela" drilling location in the scenic "Murray Buttes" area on lower Mount Sharp. The panorama was stitched together from multiple images taken by the MAHLI camera at the end of the rover's arm.
(Image: © NASA/JPL-Caltech/MSSS)

NASA's Mars rover Curiosity has taken a gorgeous selfie that shows the rugged, mountainous landscape the six-wheeled robot will be exploring during its newly begun extended mission.

The selfie is composed of about 60 images Curiosity took on Sept. 17 and Sept. 20 while it was drilling into Martian rock and performing other activities at a site dubbed Quela. That site is located in the foothills of the 3-mile-high (5 kilometers) Mount Sharp.

Quela is about halfway up a 600-foot-thick (180 meters) layer of rock known as the Murray formation. Curiosity's work in the lower parts of this formation indicated that billions of years ago, the area hosted a system of lakes that lasted a long time — perhaps tens of millions of years, mission scientists have said. [Curiosity Team Highlights 4th Year on Mars (Video)]

Over the next year or so, the Curiosity team plans to drive the car-size rover through the Murray formation's upper half.

"We will see whether that record of lakes continues further," Curiosity project scientist Ashwin Vasavada, of NASA's Jet Propulsion Laboratory in Pasadena, California, said in a statement. "The more vertical thickness we see, the longer the lakes were present, and the longer habitable conditions existed here. Did the ancient environment change over time? Will the type of evidence we've found so far transition to something else?"

The $2.5 billion Curiosity mission touched down inside Mars' 96-mile-wide (154 km) Gale Crater in August 2012, to search for evidence that the region could once have hosted life as we know it.

Curiosity quickly determined that the area near its landing site harbored a potentially habitable lake-and-stream system in the ancient past, fulfilling the chief mission goal. In September 2014, after a 14-month trip, the rover reached the foothills of the towering Mount Sharp, whose many layers hold a history of Mars' transition from a relatively warm and wet world to the cold, dry planet it is today.

Curiosity has been slowly climbing up through these layers for the last two years. And it should continue that work for at least two more years, provided nothing goes wrong; on Saturday (Oct. 1), the rover officially began a two-year extended mission, the second such extension NASA has granted Curiosity.

"This mission, as it explores the succession of rock layers, is reading the 'pages' of Martian history — changing our understanding of Mars and how the planet has evolved," Curiosity program scientist Michael Meyer, who's based at NASA Headquarters in Washington, D.C., said in the same statement. "Curiosity has been and will be a cornerstone in our plans for future missions."