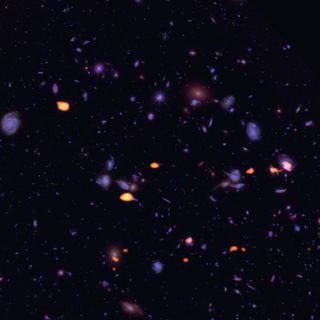 Researchers have looked at a famous sliver of sky with new eyes, revealing clues about galaxies' star-forming potential over time and verifying the early "golden age" of rapid star formation.

Using the Atacama Large Millimeter/submillimeter Array (ALMA), an enormous radio telescope in Chile, an international team of astronomers has pinpointed star-forming gas interspersed among the ancient galaxies of the Hubble Ultra Deep Field — a region first observed in detail by the Hubble Space Telescope. Although researchers have examined the region at radio wavelengths before, this is the most detailed and sharpest view, and it lets researchers see how star-forming potential has changed over the universe's life span.

The findings were announced today (Sept. 22) at the Half a Decade of ALMA conference in Palm Springs, California. [Watch: ALMA Probe Of Hubble Ultra Deep Field Is 'Deeper and Sharper']

In 2004, when researchers first examined the Hubble Ultra Deep Field, a tiny fraction of the sky (700 times smaller than the moon as viewed from Earth) by the constellation Fornax, they found an astonishing abundance of glittering galaxies stashed away in the seemingly insignificant spot. Since then, scientists have used the Hubble Space Telescope and other observatories to return to that location again and again, examining the distant galaxies to learn more about them.

One benefit of peering so deep in space is that it's equivalent to looking deep into the universe's past — the more distant a galaxy, the earlier in the universe's lifetime its light was emitted toward Earth.The farthest galaxies in the Hubble Ultra Deep Field date back to near the universe's beginning more than 13 billion years ago.

With this new search, researchers focused on everything visible in a region of space, called a "blind search,"  rather than examining a particular feature.

"We conducted the first fully blind, three-dimensional search for cool gas in the early universe," Chris Carilli, an astronomer with the National Radio Astronomy Observatory in New Mexico and a member of the research team, said in a statement. "Through this, we discovered a population of galaxies that is not clearly evident in any other deep surveys of the sky."

ALMA, which senses longer wavelengths of light than Hubble does, picked up galaxies with large clouds of cold dust and gas, which are hotbeds for star formation. Rather than the stars that already exist, like Hubble sees, the ALMA survey revealed areas with the potential to develop stars in the future. Along with the announcement of the observations at today's conference, the results are described in seven scientific papers accepted for publication in The Astrophysical Journal.

In particular, the observations focused on the gas carbon monoxide, which often appears in regions with good star-forming conditions, researchers said in the statement. The team was able to assemble two types of data gathered by ALMA. One type revealed the distance — and, therefore, age — of the observed patches — to plot the prevalence of star-forming gas from 2 billion years after the Big Bang until now.

"These newly detected carbon-monoxide-rich galaxies represent a substantial contribution to the star-formation history of the universe," Roberto Decarli, an astronomer at the Max Planck Institute for Astronomy in Heidelberg, Germany, and a member of the research team, said in the statement. "With ALMA, we have opened a pathway for studying the early formation and assembly of galaxies in the Hubble Ultra Deep Field."

"The new ALMA results imply a rapidly rising gas content in galaxies with increasing look-back time," Manuel Aravena, an astronomer at the Diego Portales University in Chile who was also on the research team, said in the statement. "This increasing gas content is likely the root cause for the remarkable increase in star formation rates during the peak epoch of galaxy formation, some 10 billion years ago."

The new results came from a 40-hour span of observation time, and covered about one-sixth of the Hubble Ultra Deep Field. An additional 150 hours are approved for researchers to survey an even larger area with ALMA.