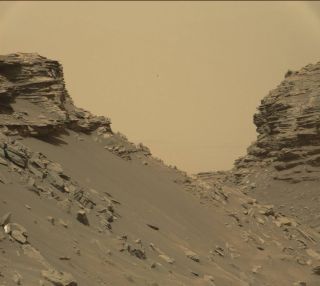 Curiosity took the photos on Thursday (Sept. 8) as the rover said farewell to Murray Buttes, an area with steep rock formations at the base of the 3.4-mile-high (5.5 kilometers) Mount Sharp. The rover, also known as the Mars Science Laboratory, has been investigating the Murray formation for the last month.

Soft, eroded layers of sandstone at Murray Buttes are preserved beneath a layer of hard rock. Winds likely created the ancient landscape by depositing sand at the base of a newly formed Mount Sharp. These layers of rock likely hold clues about the geological and climate history of Mars, according to NASA officials. [Photos: Spectacular Mars Vistas by NASA's Curiosity Rover]

"Curiosity's science team has been just thrilled to go on this road trip through a bit of the American desert Southwest on Mars," Curiosity Project Scientist Ashwin Vasavada, of NASA's Jet Propulsion Laboratory in Pasadena, California, said in a statement.

"Studying these buttes up close has given us a better understanding of ancient sand dunes that formed and were buried, chemically changed by groundwater, exhumed and eroded to form the landscape that we see today," Vasavada added.

The Curiosity rover just celebrated the four-year anniversary of its dramatic landing on Mars. On Aug. 5, 2012, the rover plopped down onto the floor of Gale Crater, a 96-mile-wide (154 km) dent in the Martian surface. Mount Sharp sits in the center of the crater, about 5 miles (8 km) from the base of Mount Sharp. [Infographic: Mars Rover Curiosity's Landing Site: Gale Crater].

Now the rover is leaving Murray Buttes, set to continue climbing up Mount Sharp despite the damage Mars' rugged terrain has inflicted on the vessel's wheels.

Since arriving on the Red Planet, Curiosity has found evidence to suggest that Mars once had water — and possibly even microbial life.