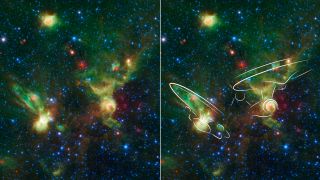 NASA traced two "Enterprises" in the shapes of two nebulas found in the constellation Vulpecula. The image was taken in three infrared wavelengths by the Spitzer Space Telescope.
(Image: © NASA/JPL-Caltech)

Two nebulas, or star-birth regions, spotted by NASA's Spitzer Space Telescope bear a striking resemblance to the starship Enterprise, and the space agency released images of these nebulas to celebrate the 50th anniversary of "Star Trek" Thursday (Sept. 8).

The Spitzer Space Telescope captured images of these nebulas in the constellation Vulpecula. Nebulas are known as star formation regions because they are filled with free-floating gas and dust, which clump together to eventually build young stars and star systems.

The image was acquired as part of Spitzer's infrared surveys of the Milky Way, which are called GLIMPSE and MIPSGAL. In the image, blue represents light wavelengths of 3.5 microns, green represents 8.0 microns and red is 24 microns.

"The green colors highlight organic molecules in the dust clouds, illuminated by starlight," NASA officials said in a statement. "Red colors are related to thermal radiation emitted from the very hottest areas of dust."

Over the centuries, astronomers have used familiar objects to classify things they see in the sky — a phenomenon called pareidolia. Examples of pareidolia include constellations such as Orion, asterisms such as the Summer Triangle, and famous nebulas such as the Ant, Hourglass or Stingray."Astronomically speaking, the region pictured in the image falls within the disk of our Milky Way galaxy and displays two regions of star formation hidden behind a haze of dust when viewed in visible light," they added. "Spitzer's ability to peer deeper into dust clouds has revealed a myriad of stellar birthplaces like these."