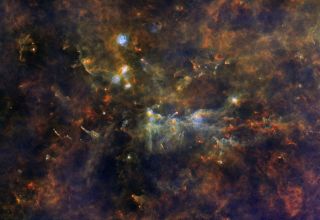 An image of Vulpecula OB1, a birthplace of massive stars, captured by the Herschel Space Observatory. The image was obtained during the Hi-GAL survey, which mapped the Milky Way by using five different infrared wavelengths.
(Image: © ESA/Herschel/PACS, SPIRE/Hi-GAL Project)

The raw material to create stars for millions of years is captured in this stunning, newly retrieved photo from the European Space Agency's Herschel Space Observatory.

The space-based telescope was built to detect radiation that had been invisible to other telescopes at the time. That ability not only allowed it to fulfill its major objective of discovering how the first galaxies formed and evolved, but also made it an excellent choice for detecting dust and gas clouds that lead to the formation of new stars. Although its mission ended in 2013, scientists are still analyzing the wealth of data that Herschel collected over its four years of operation, uncovering stunning photographs such as this one.

Located in the constellation Vulpecula, or Little Fox, the region (pictured here in infrared wavelengths) births some of the biggest stars in the galaxy. These colossal O- and B-type stars have much more mass than the sun — up to 16 times more for B stars and up to a staggering 100 times more for O stars — and their lives are significantly shorter for it. They last only a few million years before exhausting their fuel, collapsing and exploding as supernovas, triggering the next batch of stellar births in the region. Because they are so short-lived, the presence of a large number of them in one place signals ongoing star formation.

But what is truly surprising about this image is that the filaments of glowing interstellar gas seen here as red and orange threads are part of a vast, structured web that stretches across all of the galaxy's star-forming regions, NASA officials said in a statement. It was obtained via the Herschel Infrared Galactic Plane Survey, which mapped the inner Milky Way in five different infrared wavelengths.