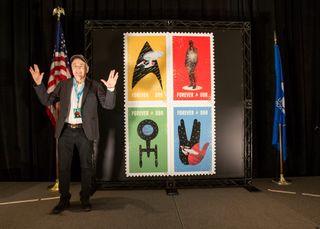 The new stamps were revealed just ahead of the Sept. 8 anniversary of the show's debut episode in 1966. A first-day-of-issue ceremony for the stamps kicked off the beginning of Star Trek: Mission New York, a three-day-long celebration happening at New York City's Jacob K. Javits Convention Center.

Four different colorful designs are included on the stamp sheet, including the show's starship Enterprise, a Starfleet insignia, Spock's famous Vulcan salute and a crewmember beaming away via the show's transporter technology. [See more photos of the new Trek stamps]

"For more than 50 years, 'Star Trek' has entertained us, engaged us and taken us on a tremendous journey, inspiring optimism and a better understanding of the American psyche," Megan J. Brennan, postmaster general and CEO of the U.S. Postal Service (USPS), said during the ceremony.

"I'm so old, I remember when you had to use your tongue to mail a letter," Koenig said, according to StarTrek.com. "I've always liked seeing the word 'Forever' on a stamp. It says to me we'll still be around, and for a long, long time."

The new stamps were designed by artists Jason Kernevich and Dustin Summers. "Our process was to create imagery that speaks to the iconic quality of the 'Star Trek' series and its vast visual language, as well as alludes to the aesthetic of 1960s science fiction," the artists said in a statement on StarTrek.com.

The stamps can be purchased in USPS officesor online here.

Because they are Forever stamps, they will "live long and prosper," and will always be valid for mailing First Class letters, regardless of the current postal rate.