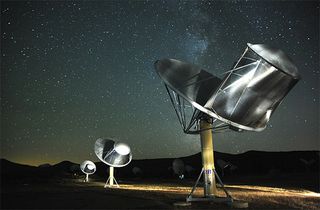 The SETI Institute is using the Allen Telescope Array in Northern California in an attempt to confirm an intriguing signal coming from the star HD 164595.
(Image: © SETI Institute )

A powerful signal has been spotted coming from the vicinity of a sunlike star, and now astronomers are trying to figure out what it means.

In May 2015, researchers using a radio telescope in Russia detected a candidate SETI (search for extraterrestrial intelligence) signal that seems to originate from HD 164595, a star system that lies about 94 light-years from Earth, the website Centauri Dreams reported over the weekend.

The astronomers have not yet published a study about the detection; they plan to discuss it next month at the 67th International Astronautical Congress (IAC) in Guadalajara, Mexico, according to Centauri Dreams' Paul Gilster, who wrote that one of the team members forwarded him the IAC presentation. [13 Ways to Hunt Intelligent Alien Life]

To be clear: Nobody is claiming that aliens beamed out this signal. But that is one of the possible scenarios at the moment, Shostak told Space.com.

The scientists who made the detection are respected researchers, and the signal is strong enough that it's probably not just random noise, Shostak said. Furthermore, the signal is consistent with something an alien civilization might send out — and if aliens did indeed do it, they are certainly far more advanced than we are, he added.

Based on the received signal's characteristics, aliens would have to generate about 100 billion billion watts of energy to blast it out in all directions. And they'd still have to produce more than 1 trillion watts if they beamed it only to Earth for some reason, Shostak said.

"The first number is hundreds of times more than all the sunlight falling on Earth," he said. "That's a very big energy bill."

The SETI Institute focused the Allen Telescope Array (ATA), a system of radio dishes in Northern California, at HD 164595 Sunday night (Aug. 28) and plans to do so again tonight (Aug. 29), Shostak said. He certainly hopes the ATA finds something that would suggest ET is behind the signal, but he said he suspects there's a more prosaic explanation.

For example, it's possible that interference by an Earth-orbiting satellite or something else close to home is responsible, Shostak said. Indeed, he said that such "terrestrial interference" would be his bet, if we ever do learn what caused the signal.

But, sadly, it's very possible that we'll never know. The Russia-based team apparently observed the HD 164595 system 39 different times and only detected the signal once, Shostak said. If nobody sees it again, it will probably remain a mystery, much like the famous "Wow!" signal of 1977.

"Without a confirmation of this signal, we can only say that it's 'interesting,'" Shostak wrote today in a blog post about the candidate signal detection.