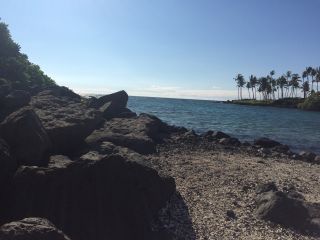 Black lava rocks dominate much of the landscape in certain areas of the island of Hawaii. This alien landscape is what makes Hawaii an ideal location for a mock Mars mission.
(Image: © Calla Cofield/Space.com)

The area surrounding Kona International Airport on the island of Hawaii isn't necessarily a tropical paradise. The ground looks like it was recently scorched by fire — there is no soil or dirt, just made of black, crusty rock. Almost no vegetation grows there, except for pale yellow tufts of grass that manage to spring up between the cracks.

While "lush" isn't exactly a word that describes this landscape, it's still beautiful and fascinating. This black crusty rock is, of course, the cooled lava that created this island chain.

I don't know if some travelers are disappointed when they see this burnt landscape, but it is an extremely fitting start for my trip here. I've arrived in Hawaii to see six people emerge from a year-long mission of isolation that is meant to imitate what it might be like for humans to live on another planet, like Mars.

This is the end of the fourth and longest isolation mission to take place in Hawaii as part of a program called HI-SEAS (Hawai'i Space Exploration Analog and Simulation). The habitat where the crew have been living for a year (with limited contact to the outside world) is on the slopes of Mauna Loa, one of the active volcanos on the island, and the barren landscape has a distinctly Martian vibe.

The crew can't go outside, except during science excusions, when they have to wear space suits. They have access to email and can talk to the Mission Specialists "back on Earth," but only with a 20-minute delay. These people have been just a few miles from paradise, but for the last year they might as well have been on Mars.

Later today (Aug. 28) the crew will exit the habitat, eat some fresh food for the first time in twelve months, and then talk with members of press about their experience. Seeing and hearing how those people coped with that exhausting psychological exercise will illustrate just how harsh this landscape can be.

I'm riding up to the HI-SEAS isolation habitat on Hawaii's Mauna Loa volcano, in a van with about eight other journalists. The habitat is about an hour's drive from our carefully landscaped hotel on the beach, and as we drive away from the manicured lawns, the vegetation becomes extremely patchy. As we climb higher up the mountain, the trees and grass become sparse, and at some point, all signs of life fade away. All that's visible are jagged lava rocks. A cloud descends on us, and the fog reduces visibility to perhaps 100 feet (30 meters). The murky alien landscape can only be described as "spooky."

We reach a parking lot about 1 mile (1.6 kilometers) from the habitat and realize the vans can't go any farther. The road is unpaved here, and steep. So we hop into a pickup truck driven by one of the HI-SEAS volunteers — four of us in the cab, and four in the truck bed. The air is no longer humid and tropical, but dry and desert-like. The temperature has dropped 20 degrees Fahrenheit (11 degrees Celsius).

Our driver, Arthur, is one of about 40 volunteers who make up HI-SEAS Mission Support. At least one member of this team is online at all times (each takes a 4-hour shift), so someone is always available to help the crew or answer any questions. However, there's a 20-minute communication delay (to simulate the time it would take to send a message from Earth to Mars), so it takes at least 40 minutes to answer a yes-or-no question. On this day, though, Arthur is driving journalists up the mountain.

When we finally reach the dome, it's smaller than I expected, although the crewmembers will later tell us that they were surprised at how spacious it was inside. I talked with one of the designers of the habitat; he stressed that they put a lot of thought into the layout — after all, six people were going to live there for a year.

Behind the dome, and to the right side, the rocky, Mars-like landscape appears to go on forever. The rocks look treacherous — they're extremely sharp and uneven. There are lava tubes all over — they literally look like pipes formed in the rocks. But these lava rocks are also very brittle, and the lava tubes can break under your feet suddenly.

Looking down the mountain and to the left, it's possible to see some greenery, the ocean and, at night, the lights from a nearby military base. Someone living here would have that beacon reminding them that they're still on Earth.

The crew emerged at about 9 a.m. (see our full story here), greeted by family members, Mission Support and the mission scientists. They all seem extremely nonchalant.

"We're all incredibly well adapted people," Sheyna E. Gifford, the chief medical and safety officer for the mission, tells me. "When you say, 'The best of humanity goes to space,' we mean that in the physical and mental sense, but also in the psychological sense. We're just terribly well adapted. I have literally been air dropped into other countries, and I just kind of walk it off … We're very sort of relaxed people, and we can deal with just about anything, including jumping 100 million miles in a matter of seconds."

Editor's note: Calla Cofield is visiting Hawaii and the HI-SEAS mock Mars habitate on a trip paid for by the National Geographic Channel's "Mars" miniseries.