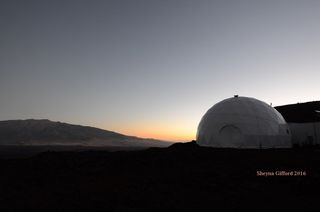 The HI-SEAS mock Mars habitat is where six crew members have been living for one year, isolated from the outside world. This, the fourth HI-SEAS mission, ends Aug. 28.
(Image: © HI-SEAS, Sheyna Gifford)

After a year living in isolation, six crew members on a mock mission to Mars are returning home today (Aug. 28).

The crew members have been living in an isolated habitat on the bare, rocky slopes of Mauna Loa on the island of Hawaii, as part of the HI-SEAS program (Hawaii Space Exploration Analogue and Simulation), based out of the University of Hawaii. The program is helping scientists to understand how the isolation of a deep space mission would impact human participants.

The mission participants have lived together for 12 months, with limited contact with friends, family and the outside world. The crew is schedule to exit the habitat at 3 p.m. EDT (1900 GMT). This is the fourth and longest HI-SEAS mission to date.

The HI-SEAS habitat is an almost entirely self-sufficient structure, where participants utilize a limited supply of food and other necessities. Any communications between the crew and the outside world experiences a 20-minute delay, to mimic the limitations of communicating with deep space locations. Some of the crew members have been writing blog posts about their experience in the habitat.

HI-SEAS is a NASA-funded program that has been operating since 2012. The duration of its isolation missions have gradually increased, with the first mission lasting just short of four months, the second mission lasting a full four months each, and the third mission lasting eight months. The scientific studies done by HI-SEAS researchers "focus on the need to identify psychological and psychosocial factors, measures, and combinations that can be used to compose highly effective teams for self-directing long-duration exploration missions," according to the HI-SEAS website.

HI-SEAS is currently seeking participants for its next two isolation missions, which will send teams to the mock Mars habitat in 2017 and 2018 for eight months at a time. You can learn how to apply at the project's announcement calling for volunteers here. Applications are due by Sept. 5.