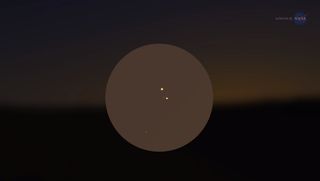 A preview of Venus and Jupiter during an extremely close encounter, which will take place just after sunset on Aug. 27, 2016.
(Image: © Science@NASA)

It might seem odd to talk about the Star of Bethlehem during the month of August, rather than December, when the celebration of Christmas prompts many people to recount the biblical story of three wise men guided to the birthplace of Jesus Christ by a bright object in the sky.

There have been numerous possible scientific explanations of what the Star of Bethlehem may have been. And whether you believe in the story of the star or not, one of those proposed possibilities will play out in the night sky soon after sundown on Saturday evening (Aug. 27): an exceedingly close encounter between the two brightest planets, Venus and Jupiter.

Along the East Coast of the U.S., just before sunset, the two planets will be at their very closest and will come within 4 arc minutes (0.06 degrees) of each other. (For comparison, look for the middle star of the Big Dipper's handle, Mizar. There is a tiny companion star next to it known as Alcor, and separation between the two stars is 12 arc minutes, or 0.2 degrees). [Venus-Jupiter Conjunction 2016: When, Where and How to See It]

Two planets coming this close together makes for a very striking sight, if they do not differ too much in brightness.

It must be remembered that the Chaldeans who occupied Mesopotamia 2,000 years ago were assiduous observers of the night sky and were very familiar with the motions of the sun, moon and planets. They would never simply mistake something like the bright star Sirius or a bright planet as being something out of the ordinary. These ancient stargazers were much better acquainted with the stars and constellations than most people in our 21st century world (thanks largely to the scourge of light pollution, which blocks the stars from view). But if something very rare took place in the sky, the ancient skywatchers would have noticed it immediately.

Saturday's Venus-Jupiter encounter is one of those rare events, and something similar appeared in the sky more than 20 centuries ago.

Taken literally, the biblical account of the story of the Star of Bethlehem calls for not one, but two "stars." One to be seen at the start of the Magi's journey, while the other appearing to them upon their arrival in Bethlehem.

Interestingly, in August of 3 B.C., Venus and Jupiter were prominent in the predawn eastern sky, and on Aug. 12 they came within just 9 arc minutes (0.15 degrees) of each other as seen from the Middle East. Incidentally, this sign would have been seen by men "in the east," explaining the phrase in the Book of Matthew.

Ten months later, Venus and Jupiter got together again for an even more spectacular encore on June 17, 2 B.C., when at sundown from Babylonia they were separated by just 4 arc minutes of each other, about 35 degrees above the western horizon. As the sky grew dark, the two brightest planets drew closer to each other until finally at 9:15 p.m. local time they drew to within 36 arc seconds (0.01 degree) equal to the mean apparent width of Jupiter as seen through a telescope, at an altitude of 15 degrees above the horizon. To most people, the two planets must have appeared to coalesce into a single "star" somewhat brighter than Venus alone. Eyeglasses were many centuries in the future, so only people with unusually acute vision would have seen the planets separated.

The fact that Jupiter and Venus had such a close conjunction at this time in history has led some people theorize that it could be an explanation for the Star of Bethlehem. Space.com makes no such claim, we only point out that such an event is truly eye catching, as skywatchers will have the opportunity to observe this Saturday. [The Brightest Stars in the Sky: A Starry Countdown]

It certainly will be interesting to see what kind of spectacle Venus and Jupiter will offer Saturday evening. Unfortunately, unlike 2,000 years ago, seeing the two planets will be a bit of a challenge. Skywatchers who wish to observe the event should make sure they have a clear view of the western horizon, with no tall obstructions, like trees or buildings, to block the view.

Near and along the  Atlantic seaboard, about a half hour after sunset, Venus and Jupiter will be difficult to observe, because they will only be about 5 degrees above the horizon, and partly obscured by the bright background of the twilight sky. The planets will be separated by only 5 or 6 arc minutes, and the twinkling caused by Earth's atmosphere, particularly at the horizon, will also make it difficult to distinguish the two planets. Only the sharpest eyes will be able to split them. Farther west, the separation between the two planets will be greater, and for those along the West Coast people with normal eyes should be able to distinguish the two planets, even though the planets will be closer than the stars Mizar and Alcor in the Big Dipper's handle.  Wherever you are, binoculars will certainly help you in making a sighting.

Places farther south will see the two planets at a higher altitude. From New York City, Venus and Jupiter will be a mere 5 degrees above the horizon a half hour after sunset. From Brownsville, Texas, or Key West, Florida, the planets will appear twice as high at around 10 degrees. South of the equator, the "double planet" will appear even higher.

From Rio de Janeiro, the planets will appear nearly 20 degrees above the western horizon a half hour after sunset. Remember that your clenched fist, held at arm’s length, measures approximately 10 degrees. So a half hour after sunset, New Yorkers will see Venus and Jupiter only "half a fist" above the horizon. Those in south Florida and south Texas will see them about "one fist up," while in Rio they’ll appear at a more manageable "two fists" up in the western sky.

Sadly, for those living in more northerly locations, it will be very difficult, if not impossible to see the two planets in the twilight. From Edmonton, Alberta, for instance, at a latitude of 54 degrees north, Venus and Jupiter will be sitting on the horizon, about to set out of sight.

In other parts of the world, Venus and Jupiter will appear to come quite close to each other, though not quite as close as Western Hemisphere viewers will see them. Europeans will see them approach to within about 12 or 13 arc minutes of each other. From eastern Asia and Australia, they’ll be separated by about half a degree (the apparent width of a full moon), but the closest approach will come on Sunday, not Saturday evening (local time).

I did a computer check to see just how often Venus and Jupiter come within 6 arc minutes of each other, in a dark or twilight sky as seen from North America.  We have to go as far back as Nov. 14. 1660, when the two planets were within 6 arc minutes as they rose above the eastern horizon a few hours before sunrise. Our next opportunity will come on the morning of Nov. 22, 2065, when Venus and Jupiter will be merged together as one brilliant singular point of light as they rise above the east-southeast horizon just before sunrise.