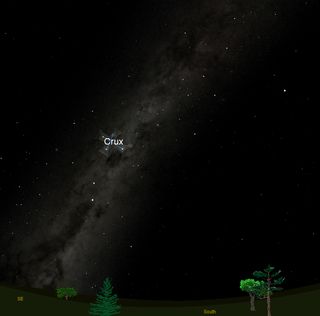 This sky map shows the location of the Southern Cross constellation, or Crux, as it appears in the late April sky to observers in the Southern Hemisphere.
(Image: © Starry Night)

Acrux is one of the brightest stars in the sky, but its brightness gets a boost because it is actually a multiple-star system. Three stars make up the system, and astronomers debate whether or not a fourth star "belongs" to the trio.

The main star, Alpha-1, is actually two stars — a spectroscopic binary, meaning that the two stars can only be resolved individually by looking at their orbital motions' effects on the spectrum, according to astronomer Jim Kaler. The other star is Alpha-2.

The fourth star lies relatively nearby, but it is likely that it is "a more distant star that happens to lie along the same line of sight," according to astronomer David Darling.

Acrux is the base of the constellation Crux, or the Southern Cross. It is best visible from Earth in areas that are farther south than 27 degrees N, such as Hawaii. Acrux's location is:

The star system has been viewed for hundreds of years on Earth. About 2,000 years ago, the Southern Cross was visible from the latitude of Jerusalem (almost 32 degrees N). Some people say Acrux was the star of Bethlehem that led the Magi to the baby Jesus.

Crux points almost due north-south. You follow the line south through Gamma Crucis and Acrux (Alpha Crucis) to arrive near the South Celestial Pole in the constellation Octans.

In 2008, the Cassini spacecraft spotted the star in between the rings of Saturn.

Acrux is the 13th brightest star in the sky, with an apparent magnitude of 1.33. At first glance, Alpha-1 appears as a B subgiant that has a magnitude of 1.4 and luminosity 25,000 times that of the sun. Looking at it with a spectrograph, however, reveals two stars that are 14 and 10 times the mass of the sun. They're about one sun-Earth distance (astronomical unit) apart and orbit each other every 76 days. [The Brightest Stars in the Sky: A Starry Countdown]

Astronomers have also noted a B-subgiant that is 90 arcseconds away from the triplet in Earth's sky, but it likely is unrelated to Alpha-1 and Alpha-2, Darling said. Astronomer Jim Kaler disagrees: "It more or less shares Acrux's motion through space, and appears as if it might be gravitationally bound to the inner trio," he wrote on his website.

Future of the system

With two stars so close to each other in the system, interesting things could happen at the end of their lifespan. The masses of the twin Alpha-1 stars suggest they could go supernova, said Kaler.

"The fainter component of Alpha-1 may escape to become a massive white dwarf. It's so close to its more massive companion, which will be the first to blow, that it may be ejected right out of the system," he wrote.

"All this said, we must be very aware of all the uncertainties involved, which for this star are legion indeed; few of the data and conclusions above should be taken as absolute or even to be reasonably accurate."

Because Acrux is one of the stars of the Southern Cross, it is present on the flags of several nations, including Australia, Papua New Guinea and New Zealand.