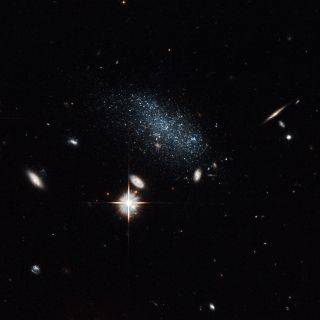 This color composite taken on Nov. 8, 2014 by the Hubble Space Telescope of Pisces B shows what the dwarf galaxy would look like to the naked eye – a faint cluster of blue stars surrounded by distant, brighter galaxies.
(Image: © NASA, ESA, and E. Tollerud (STScI))

After spending most of their lifetimes stuck inside a cosmic wilderness, two dwarf galaxies have apparently made the leap to join a nearby group of galaxies in a star-formation party.

The two galaxies — named Pisces A and Pisces B — were stranded in the intergalactic void, or vast empty space, without the dust and gas necessary to build stars. But with gravity pulling them toward the galactic "big city" (as NASA officials described it), the two dwarf galaxies have kicked off a blaze of new star birth, researchers said in a new study describing the findings.

Astronomers using the Hubble Space Telescope spotted Pisces A and Pisces B at the boundary of the Local Void, an empty chunk of space about 150 million light-years across. This void sits just outside the Local Group, where dozens of galaxies — including the Milky Way — reside.

Billions of years ago, tiny dwarf galaxies like the Pisces pair combined to create the large spiral and elliptical galaxies seen today. But while the dwarf galaxies neighboring Pisces A and Pisces B mingled and merged, these two loner galaxies initially skipped out on the galactic party.

"These Hubble images may be snapshots of what present-day dwarf galaxies may have been like at earlier epochs," lead researcher Erik Tollerud, of the Space Telescope Science Institute (STScI) in Baltimore, said in a statement. "Studying these and other similar galaxies can provide further clues to dwarf galaxy formation and evolution."

Because of their small size and dim glow, dwarf galaxies can be difficult to find. The Hubble telescope has the sharp vision needed to study these faint galaxies. Using the telescope, astronomers determined the distances from Earth to Pisces A and Pisces B to be about 19 million and 30 million light-years, respectively. This allowed researchers to figure out these galaxies' locations at the boundary of the Local Void.

Another piece of evidence of the galaxies' void address is their hydrogen content relative to that of similar galaxies, Tollerud said. "In the past, galaxies contained higher concentrations of hydrogen, the fuel needed to make stars," he said. "But these galaxies seem to retain that more primitive composition, rather than the enriched composition of contemporary galaxies, due to a less vigorous history of star formation."

The new Hubble observations also allowed the researchers to focus on individual stars and estimate their ages.

Both dwarf galaxies contain around 20 to 30 young, bright-blue stars. Tollerud explained that the void environment in which Pisces A and Pisces B resided would have slowed their evolution by preventing new stars from forming. But as the dwarf galaxies migrated toward the more populated Local Group, they kicked off a firestorm of new star birth.

Tollerud and his team of researchers from Yale University, Colombia University, the University of Washington and the American Museum of Natural History published their results Aug. 11 in The Astrophysical Journal.

The Hubble Space Telescope is a joint mission by NASA and the European Space Agency that launched in 1990.