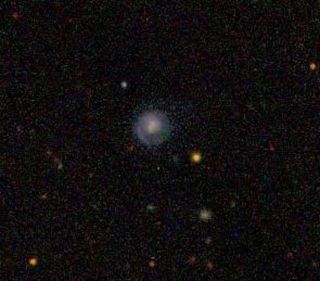 MINNEAPOLIS, MN - There are galaxies that inhabit the nearly empty deserts of space. Unexpectedly, these "void galaxies" are still forming hot, blue stars - even more than the average galaxy in the more populated regions of the universe.

Fiona Hoyle of Widener University presented the discovery of a thousand galaxies in the lonely wilds of the cosmic voids at the 206th Meeting of the American Astronomical Society last month in Minneapolis.

The voids are typically 100 million light-years across, and yet they contain only a few galaxies each. Taken together, the voids fill 40 percent of the volume of the universe, but their galaxies account for less than 5 percent of all galaxies.

"Void galaxies had been observed previously, but this is the first statistical sample," Hoyle told SPACE.com. She and her collaborators were able to identify a large population of galactic oases in the huge map provided by the Sloan Digital Sky Survey.

The researchers found that these galaxies tend to form near the edges, as opposed to the centers, of the voids - like hermits that want to remain within earshot of civilization.

But the most remarkable finding is how blue the void galaxies appear. No, this is not because they are lonely. Instead, the blue color indicates that they are still busy making stars.

Young massive stars burn hotter and therefore bluer. Over time, these bright blue stars use up their fuel and disappear, leaving only the less massive red stars to light up an old galaxy.

The implied star formation rate in the voids is higher than what is found in the average dense environment. This was not expected, since the gas supply for making stars is thought to be gravitationally swept up by higher density regions. Most theories, therefore, assume that voids would need to form galaxies early on before the gas went away.

If this is correct, then the void galaxies may be what Hoyle calls "steady Eddies" - old galaxies that have been very conservative with how many stars they made over their lifetime.

"In this case void galaxies are like people that wisely saved for retirement so that they had funds at an old age, rather than spending all their money during their youth," Hoyle said.

Hoyle and her colleagues plan to study the age of these galaxies more carefully, in hopes of deciphering just how star formation proceeded out there in the cosmic desert.