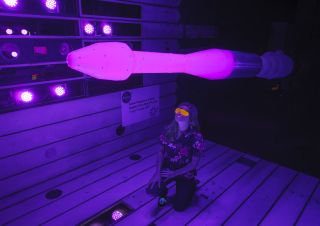 To see how new rocket and aircraft designs perform under pressure, NASA's aeronautical innovators are painting model prototypes an eye-searing hot pink for wind tunnel tests in California and Virginia.

The wild paint job isn't just for looks. NASA engineers are using a pressure-sensitive paint (PSP) that can show — with a dazzling glow — how the surface of a rocket or aircraft model responds to pressure. NASA is conducting the tests in wind tunnels at the agency's Ames Research Center in California and Langley Research Center in Virginia.

Here's how it works: Once inside the wind tunnel, the model aircraft is illuminated with blue LED lights to give the fluorescent paint a bright-pink glow. Then, high-speed winds flow across the model, creating a range of surface pressures across different parts of the aircraft. [NASA's Vision of Future Air Travel in Pictures]

Oxygen in the wind reacts with luminophores, or fluorescent particles, in the paint, quenching its glow under high pressure. The varying shades of dull and bright pink that result allow researchers to visualize exactly how the pressure is distributed.

"PSP is great because, as long as you can apply paint to the area you want to test, illuminate it with a lamp and view it with a camera, you can gather data you might not otherwise be able to get," Nettie Roozeboom, an aerospace engineer at NASA's Ames Research Center, said in a statement.

Understanding how pressure is distributed over the surfaces of an aircraft is important for designing new planes that don't fall apart while flying in high-speed winds. But it also helps engineers build aircraft that are more efficient. With less wind resistance, aircraft require less fuel, emit less pollution and produce less noise.

NASA has used PSP to test airplanes for more than 25 years. Today, the agency is working to make more effective PSPs to test vehicles that leave Earth as well. The goal is to create a new and improved PSP that responds faster to pressure while also being less sensitive to temperature than the existing technology is.

But there is one thing about this paint that will likely never change: its neon-pink glow.