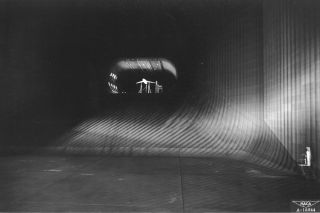 In this historical photo from the U.S. space agency, we see down the throat of the world's largest wind tunnel. The 1947 scene is NACA's 40 x 80 foot wind tunnel at Ames Aeronautical Laboratory, Moffett Field, California. The camera is stationed in the tunnel's largest section, 173 feet wide by 132 feet high. Here at top speed the air, driven by six 40 foot fans, is moving about 35 to 40 miles per hour.

The rapid contraction of the throat (or nozzle) speeds up this air flow to more than 250 miles per hour in the oval test section, which is 80 feet wide and 40 feet high. The tunnel encloses 900 tons of air, 40 tons of which rush through the throat per second at maxium speed.

Dwarfed by the immensity of the tunnel structure, the experimental model seen here is actually almost 50 feet long. Embodying a sharply swept-back wing suitable for supersonic flight, it is undergoing tests designed to improve the landing characteristics of this type of airfoil. Mounted on struts connected to scales under the test section, it is "flown standing still" while each element such as lift and drag is measured and air pressures occuring across the wing are recorded. Information gathered from such tests were made available to the nation's aircraft manufacturers by the NACA, an independent agency of the U.S. Government.