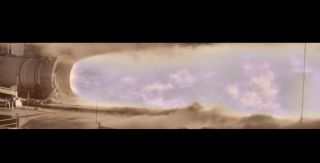 This still image from a NASA video offers a stunning view into the June 28, 2016 test of the QM-2 five-segment solid rocket booster that will be used on the agency's Space Launch System rocket. NASA used its High Dynamic Range Stereo X camera to capture the test in extreme detail.
(Image: © NASA)

You've never seen a rocket test quite like this. A new NASA video captures the eerie beauty of a massive rocket motor test in extreme slow-motion using an innovative new camera.

The video offers a spectacular view of the QM-2 test by the company Orbital ATK on June 28, which test-fired a full-scale version of the solid rocket booster that will help launch NASA's new Space Launch System megarocket on missions into deep space. To capture the booster test in extreme detail, NASA engineers and scientists used what they call a High Dynamic Range Stereo X camera (or HiDyRS-X for short).

"Traditional high speed video cameras are limited to shooting in one exposure at a time, but HiDyRS-X can record multiple high speed video exposures at once, combining them into a high dynamic range video that adequately exposes all areas of the video image for comprehensive analysis," NASA officials said in a video description. [How NASA's SLS Megarocket Will Fly (Infographic)]

And the results are haunting.

When Orbital ATK test-fired the QM-2 solid rocket booster, the event lasted only 2 minutes. NASA's HiDyRS-X video of the test, however, lasts 3 minutes. The test is already underway as the clip starts and is still going strong at the end. Brilliant swirls of superhot flame can be seen dancing about inside the rocket motor's exhaust plume.

Orbital ATK's QM-2 booster test was the second (and final) full-scale test of the solid rocket boosters to be used for NASA's Space Launch System. The first test of QM-1 occurred in March 2015. Two of the boosters will be used to help launch the SLS rocket (which will have four main engines of its own) on missions beyond low-Earth orbit.

NASA plans to use the SLS rocket to launch its new Orion spacecraft on missions that will send astronauts on deep-space voyages to an asteroid, Mars and beyond. The first test flight of SLS and Orion is sheduled for launch in fall of 2018.