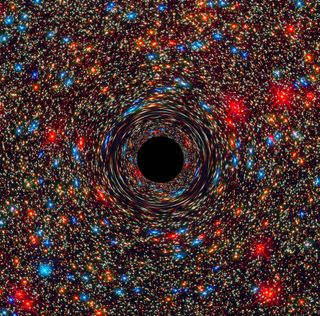 A computer simulation shows a supermassive black hole in the heart of a galaxy. The black central region represents the event horizon, where no light can escape.
(Image: © NASA, ESA, and D. Coe, J. Anderson, and R. van der Marel (STScI))

Black holes are the ultimate believers in personal privacy: they let almost no information about themselves escape into space. Rather than searching with their eyes, however, scientists have found a way to peer inside black hole using math.

"These black holes are so mathematical, there's nothing more to them than mathematics," Richard Henry, an astronomer at Johns Hopkins University, told Space.com.

Henry presented a new way to look inside black holes last month at the 228th meeting of the American Astronomical Society in San Diego. [No Escape: Dive Into a Black Hole (Infographic)]

When a massive star reaches the end of its lifetime, it can collapse down into a black hole. While supermassive black holes lie at the center of galaxies, even smaller black holes can fit the mass of several million suns inside a region no larger than a proton, Henry said. Their enormous mass, packed inside a small area, won't let anything escape, not even light. Scientists can only observe the outer edges, known as the event horizon, where material interacts with the black hole. As a result, they can determine just three properties about black holes: their mass, their spin and their charge.

The incredible mass of black holes can warp the fabric of space and time immediately around them. By focusing solely on the mathematics describing space-time around black holes, Henry and colleagues Kielan Wilcomb and James Overduin, both of Towson University in Maryland, found a new way to describe them, which implies a more complicated structure than previous measurements suggested.

Traditional mathematical descriptions for black holes suggest that the curvature of space at the event horizon is constant and positive, like a sphere, and thus scientists would use a spherical coordinate system (for example, longitude and latitude) to describe the space. Furthermore, a coordinate system made for a certain type of curved space won't always work in a different type of curved space. But in their research, the team brought up the example of looking at a map of Earth that's been changed from a sphere to a flat surface. In these so-called Mercator projection maps, Greenland appears larger than the continental United States, even though in reality it has only one quarter the land mass. Similarly, the researcher say that the coordinate system that measures locations near the black hole and within it must change depending on the region being measured.

With that in mind, the team decided to focus on mathematical quantities known as invariants. Invariants keep the same values no matter what coordinate system is used to describe them. So, for example, the number related to the length of a spacecraft heading into the black hole may change as the ship moves through different coordinate systems, but its invariants will remain constant.

Most of the 17 invariants related to the different types of black holes could be connected mathematically. According to the team, only five are truly independent, meaning their values are not tied to the values of other invariants — and scientists can map those five to construct simulations of what's happening inside of black holes.

The team described and plotted those five quantities, some for the first time ever, and revealed the black holes' complex inner world. Their equations confirmed that the wild fluctuations in one of the quantities inside a spinning black hole include regions where space-time has negative curvature more like a saddle, which are associated with a feature called gravitomagnetic fields that are responsible for producing the enormous jets spouting from supermassive black holes at the center of galaxies.

Future maps built using the researchers' new understanding of curvature within the black holes could help scientists understand why some galaxies boast jets and others, like the Milky Way, do not, Henry told Space.com.

"Black holes are another world," Henry said. "If you go there, you won't come back."

The research is available online at arXiv.