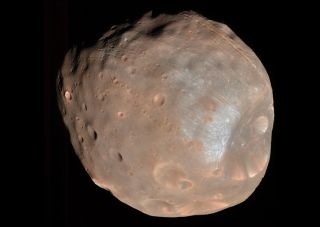 Mars' two moon,s Phobos (shown here) and Deimos, may have formed from a ring of debris around the Red Planet. Larger moons formed in the same debris ring may have crashed into Mars.
(Image: © NASA's Mars Reconnaissance Orbiter)

The moons of Mars, Phobos and Deimos, may be the only survivors of a giant impact that created many short-lived, but now-absent moons around the Red Planet, a new study finds.

Phobos and Deimos are both small for moons — about 14 and 7.7 miles (22.5 and 12.4 kilometers) wide, respectively — and sort of potato-shaped. Compared to other satellites in the solar system, they look more like asteroids. As a result, astronomers previously hypothesized that these moons were asteroids captured by Mars' gravitational pull.

But if that were the case, previous research suggested that Phobos and Deimos would have relatively irregular orbits. In reality, these moons have nearly circular orbits positioned near the Martian equator. [Photos of Mars' Moon Phobos Up Close]

Another possible origin story for the Martian moons is that they coalesced from the debris of a giant impact, similar to the one largely thought to have formed Earth's moon. This rubble would have first formed a ring around Mars, and as moons emerged from this ring, they would have ended up with similarly circular orbits. However, this possibility raises the question of why Mars would end up with two moons instead of a single moon like Earth did, according to the new research paper.

To learn more about the potential origins of Phobos and Deimos,study lead author Pascal Rosenblatt, lead author on the new study, and a planetary scientist at the Royal Observatory of Belgium in Brussels, and his colleagues investigated scenarios "left on the side until now," Rosenblatt told Space.com. "I rapidly discovered they were left not always for justified reasons."

The scientists focused on the huge impact that previous research suggested created the gigantic Borealis basin in the northern lowlands of Mars, which covers two-fifths of the Red Planet's surface. Prior work suggested that this basin is an impact crater, created when an impactor about 1,200 miles (2,000 kilometers) wide struck Mars, generating a ring of debris around the Red Planet with a mass of about 110 quadrillion tons (100 quadrillion metric tons), or about 10,000 times the combined mass of Phobos and Deimos.

The research team's computer models suggested that, over time, in the inner part of this debris ring where the rubble was most densely packed, large moons up to hundreds of miles in diameter would have clumped or accreted together. In contrast, in the outer part of the debris ring, dust and rocks were thinly dispersed, making it difficult for this material to accrete into moons.

However, the scientists found that gravitational tugs from one or more large moons from the inner debris ring could have stirred up rubble in the outer ring, shepherding rock and dust to form smaller outer moons, such as Phobos and Deimos. The researchers calculated that after about 5 million years, Mars' gravitational pull would have doomed the other moons, sending them crashing to the Red Planet's surface and leaving Phobos and Deimos as the sole survivors.

"Our results pave a new path to re-understand the Martian system in a context of formation similar but not identical to [that of] our own moon," Rosenblatt told Space.com.

If a giant impact did create the Martian moons and the Borealis basin, that might help explain many other aspects of early Martian history, such as how Mars got its current rate of spin and lost its atmosphere and surface water, Rosenblatt said.

Although the orbit of Deimos is stable, previous research found that Phobos will one day crash against Mars as well. Indeed, a 2015 study found that Phobos already has stretch marks from the Red Planet's gravitational pull.

This model suggests that Phobos and Deimos are composed of a mix of material from Mars and the impactor that created the Borealis basin. Future research can test this model by returning samples from Phobos or Deimos to Earth for study, Rosenblatt said. He noted that Japan's space agency, JAXA, and the European Space Agency (ESA) are considering missions to these moons that "could be launched as soon as 2022 or 2024."

The scientists detailed their findings online July 4 in the journal Nature Geoscience.