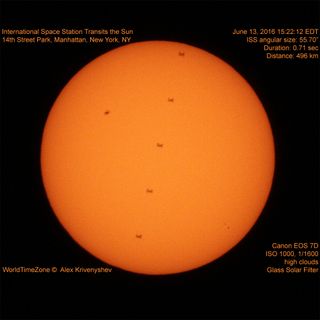 A stunning skywatcher photo shows the International Space Station (ISS) crossing the face of the sun earlier this month.

Alexander Krivenyshev, president of WorldTimeZone.com, captured the image from New York City on June 13 using a Canon EOS 7D camera, as well as a solar filter. (Warning: Never photograph or observe the sun directly without a solar filter or other such protective gear; serious and permanent damage to your eyes and equipment can result.)

"The composite image made from five frames shows the International Space Station (Expedition 47), with a crew of six onboard, in silhouette as it transits the sun on Monday, June 13, 2016 at 15:22:12 EDT," Krivenyshev told Space.com via email, adding that he took the photos from 14th Street Park in Manhattan.

The ISS cuts right down the center of the sun in the series of photos, which also show a large sunspot to the left of the station. Sunspots are dark, relatively cool areas that serve as launching pads for solar flares and eruptions of superheated plasma known as coronal mass ejections (which explains why sunspots are also known as "active regions").

There were six astronauts on board the ISS when Krivenyshev took the photos: Americans Tim Kopra and Jeffrey Williams; Russians Yuri Malenchenko, Aleksey Ovchinin and Oleg Skripochka; and Briton Tim Peake.

Kopra, Malenchenko and Peake are no longer in space; they came back to Earth aboard a Russian Soyuz spacecraft on June 18. But Williams, Ovchinin and Skripochka won't have the orbiting outpost to themselves for long: Three new crewmembers — NASA's Kate Rubins, cosmonaut Anatoly Ivanishin and Takuya Onishi of the Japan Aerospace Exploration Agency — are scheduled to launch toward the ISS on July 6.

The space station has been continuously staffed by a series of rotating crewmembers, who typically serve 5- to 6-month stints, since November 2000.