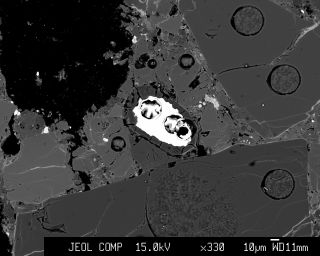 A gem of a meteorite found in Antarctica is studded with pieces of opal, a crystal that is associated with water. The discovery lends greater strength to the idea that meteorites brought water to asteroids and may also have seeded the Earth with the liquid necessary for life to evolve.

"This is more evidence that meteorites and asteroids can carry large amounts of water ice," lead author Hilary Downes said in a statement. Downes, a geochemist at the Birkbeck Institute of Earth and Planetary Sciences at the University of London, announced the results today (Monday, June 27) at the National Astronomy Meeting in Nottingham, England.

"Although we rightly worry about the consequences of the impact of large asteroids, billions of years ago they may have brought the water to the Earth and helped it become the world teeming with life that we live in today."

On Earth, opal is made up of silica — a common ingredient in sand — and water. As water runs across the planet, it picks up sand and other pieces of silica. When it evaporates, it leaves behind traces of that material that build up to form opals. Scientists have only found one other meteorite carrying the mineraloid — a rock that traveled from Mars. While the Red Planet has opal-like deposits on its surface, none have been found on asteroids.

Downes and her colleagues found that the meteorite EET 83309 is made up of thousands of broken-up rocks and minerals, suggesting that it came from the surface of an asteroid. Research on the meteorite by other scientists reveals that the rock was exposed to radiation from the sun, solar wind and other cosmic sources. Since an asteroid lacks an atmosphere to shield it from deadly radiation, its surface is constantly dosed with the deadly rays.

Bits and pieces of other asteroids were also embedded in the meteorite, suggesting that the parent asteroid was struck by numerous impacts. As a result of one of the many impacts, water could have been delivered to the surface of the asteroid, forming opal.

"The pieces of opal we have found are either broken fragments or they are replacing other minerals," Downes said.

If early meteorites carried water to asteroids, they could also have brought water to the Earth.

"Our evidence shows that the opal formed before the meteorite was blasted off from the surface of the parent asteroid and sent into space, eventually to land on Earth in Antarctica," Downes added.