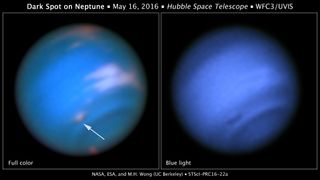 Hubble Space Telescope has confirmed a new dark vortex on Neptune. The new feature can be seen on the right in blue light, while its companion clouds can be seen at left.
(Image: © NASA, ESA, and M.H. Wong and J. Tollefson (UC Berkeley))

Neptune is sporting a new spot, the first one identified in the 21st century. NASA's Hubble Space Telescope confirmed the existence of the high-pressure system known as a dark vortex after bright clouds hinted at its presence.

"Dark vortices coast through the atmosphere like huge, lens-shaped gaseous mountains," research astronomer Mike Wong, of the University of California at Berkeley, said in a statement. Wong led the team that analyzed the Hubble data.

"And the companion clouds are similar to so-called organic clouds that appear as pancake-shaped features lingering over mountains on Earth," he added. [Photos: Most Powerful Storms of the Solar System]

Both professional and amateur astronomers started seeing the bright clouds on the ice giant in July 2015. Companion clouds form when air flowing on the planet is disturbed and cast upward by a dark vortex. At high elevations, the gas freezes into methane crystals, forming clouds. This provided the first hint of a newly formed vortex, since the high-pressure systems are typically only visible at blue wavelengths.

Hubble's Outer Planet Atmospheres Legacy (OPAL) project was formed to create global maps of the outer residents of the solar system each year, and in September 2015, researchers turned it toward Neptune. Wong and his team examined OPAL's map to find a dark spot near the bright clouds. A second look at the planet on May 16, 2016, with Hubble — the only telescope with the resolution capable of identifying weather features on Neptune — confirmed the long lifetime of the new feature.

The newfound maelstrom measures roughly 3,000 miles (4,800 kilometers) across, and lies in the planet's southern hemisphere. Other high-altitude clouds cross the planet at its poles and equator.

Both Voyager 2 and Hubble have revealed similar features on the ice giant in the past, but this is the first new features that has been spotted in over 20 years. In the past, the dark vortices have been visible in an array of sizes and shapes. They wander across the planet's latitude and occasionally speed up or slow down. Their timescales are short compared to similar storms on Jupiter, however, where atmospheric disturbances can last for decades.

Planetary astronomers are trying to better understand how the eddies form, what moves them around the planet, how they interact with their environment and how they fall apart, said Joshua Tollefson, a collaborator on the work and doctoral student at Berkeley, in the statement. Measurements of the newfound feature will help them better understand Neptune's atmosphere as well as the vortices themselves.

The new feature was announced in a Central Bureau for Astronomical Telegrams (CBAT) electronic telegram, and the report on it has not yet been published.