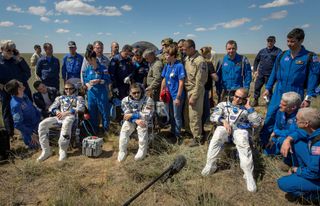 British astronaut Tim Peake, American astronaut Tim Kopra and Russian cosmonaut Yuri Malenchenko returned to Earth early Saturday morning (June 18) after six months in space; each will be returning to children at home: Peake and Kopra have two kids each (Peake's were ages 4 and 6 at the time of launch), and Malenchenko has one.

This was Peake's first spaceflight, and thus his first re-entry and return to his family, and Kopra's second. Malenchenko, who piloted the Soyuz spacecraft for the astronauts' return, will be landing for the sixth time. [Best Space Gifts for Dads and Grads]

American astronaut Jeff Williams, who has two sons and three grandchildren, and Russian cosmonauts Oleg Skripochka (two young children) and Alexey Ovchinin (one young child), will be staying on the space station for another three months.

Luckily, they'll be able to catch up easily, far from home: The space station inhabitants can communicate by email and frequently post on social media, and they can use a satellite Internet Protocol phone. Hopefully, they'll have more luck than Peake, who dialed the wrong number on Christmas Eve.

A fresh trio of crewmembers will join the three astronauts still in space in early July: first-time fliers Kate Rubins, an American astronaut, and Takuya Onishi, a Japanese astronaut, as well as Russian cosmonaut Anatoly Ivanishin.