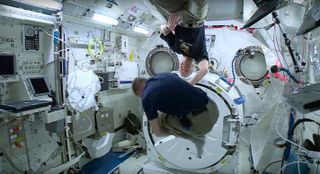 Tim Peake did 80 rapid-fire somersaults aboard the International Space Station (ISS) in an attempt to make himself dizzy — a plan the British astronaut joked could be the "worst idea I've ever had."

NASA astronaut Tim Kopra help spin the curled-up Peake, who wanted to see how well his body had adjusted to microgravity after nearly six months aboard the ISS. (You can watch Peake spin round and round in the video here.)

"Something that happens when astronauts first come into space is that they usually feel pretty rough for about the first 24 hours," Peake said before starting the experiment. This is because the body's vestibular system gets confused in space, he added. The fluid in the middle ear floats in microgravity, which doesn't jibe with the signals the eye sends to the brain, he explained. [The Human Body in Space: 6 Weird Facts]

After a day or two in space, Peake said, the brain shuts down the vestibular system and relies just on visual information to get its bearings.

"You can turn yourself around in all sorts of orientations, around, upside down, spinning about, and it doesn't really matter," a rapidly rotating Peake said in a video documenting his experiment, which was posted Sunday (June 12). "Your brain is able to cope in that situation."

But Peake decided to test this out anyway, by spinning dozens of times with Kopra's help. Peake discovered that for the most part, he felt just fine. Even when he moved his head during the spin — a "provocative" gesture, he joked — he still felt OK.

"Faster?" Kopra asked about halfway through.

"That's fine — go for it, that's good," Peake responded, adding that he didn't feel sick even as the G-forces sent fluid to the top of his head.

"I'm feeling absolutely fine," Peake said after more than a minute of spinning. "That's quite remarkable. At this point on Earth, I think I'd be feeling very, very unwell."

When the spinning finally stopped, Peake fell flat on to the "floor" of the station and said he felt dizzy. But that passed within about 10 seconds, Peake reported, saying, "I definitely felt dizzy, initially, and now it's gone."

Peake, Kopra and Russian crewmate Yuri Malenchenko will return to Earth on Saturday (June 18), about two weeks later than originally planned. While in space for his six-month mission, Peake ran a full marathon on the space station's treadmill during the London Marathon on Earth, clocking a time of just over 3.5 hours.