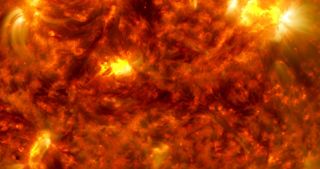 An ultra-high-resolution view of Mercury transiting the sun was captured by NASA's Solar Dynamics Observatory. Mercury can be seen in the bottom left of the image.
(Image: © NASA/Goddard/Genna Duberstein)

The fiery glory of the sun's surface is on display in a new, ultra-high-resolution video of Mercury's rare transit of the star last month.

A transit of Mercury occurs when the tiny planet passes between the sun and Earth, such that people on the ground can see a silhouette of Mercury as it moves across the surface of the star. The small planet, with a diameter just over a third of Earth's, can be hard to see with the naked eye, but is easy to spot in the new video recorded on May 9.

The movie, which has 4K visual resolution, was created using data from NASA's Solar Dynamics Observatory (SDO), a satellite in a geosynchronous orbit of Earth at an altitude of about 1,600 miles (2,574 kilometers) above the surface. The new video shows Mercury's disc pass across the sun several times as observed by SDO in different wavelengths, including ones that reveal light emitted by ionized iron and helium.

The movie compresses the event's duration, with shots taken every 12 seconds. The actual transit lasted for 7 and a half hours.

The transit, which started at 7:12 a.m. EDT (11:12 GMT), was visible to observers in the eastern half of the United States, much of South America, northwestern Europe and a slice of West Africa. Regions west of the Mississippi River, along with areas south and west of Santiago, Chile, or Buenos Aires, Argentina, caught the transit in progress at sunrise. Meanwhile, people in most of Eastern Europe, Africa and Asia could view some of the transit at sunset.

Transits of Mercury occur just 13 times per century, on average, and take place in May or November. The November transits occur when Mercury is closest to the sun, and thus farther from Earth, so the tiny planet's silhouette against the face of the sun is smaller.

The next transit of Mercury will happen on Nov. 11, 2019, and Mercury will pass even closer to the center of the sun during that event than it did in this most recent transit. The 2019 transit, however, will be visible in fewer regions of the U.S., because the event will occur in the late fall when the sun is lower in the sky.