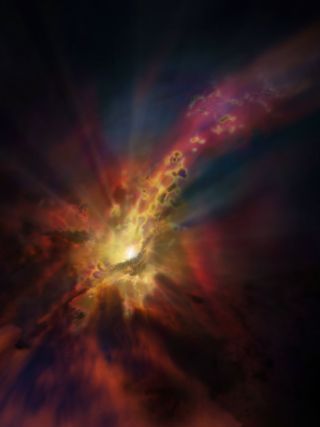 This artist's concept shows condensing clouds of cold molecular gas being accreted by the Abell 2597 Brightest Cluster Galaxy. The clouds condense out of the hot, ionized gas that suffuses the space between among the galaxies in this cluster, according to a statement from the European Southern Observatory.
(Image: © NRAO/AUI/NSF; Dana Berry/SkyWorks; ALMA (ESO/NAOJ/NRAO))

A giant, hungry black hole appears to be chowing down on cold, clumpy clouds at the center of a nearby galaxy, a new study finds. The black hole's dining habits are shedding light on how black holes throughout the universe may grow.

At the heart of nearly every galaxy is a supermassive black hole millions to billions of times the mass of Earth's sun, most astrophysicists agree. These black holes grow by gobbling up gas, dust and anything else that falls on them (scientists call this process "accreting"). The energy released by this accreting gas can in turn influence the formation of stars across the black hole's galaxy. (You can check out a video on the new black hole discovery here.)

Much remains unknown about the gaseous fuel that powers black hole growth. Scientific models of black hole eating habits are usually simplified to show a smooth, spherical inflow of very hot gas. However, recent theory and computer simulations have predicted that black hole accretion of gas is instead dominated by the random accumulation of very cold, clumpy clouds of molecules, the same material that gives rise to stars. However, researchers have lacked unambiguous evidence for this prediction, but the new study offers a concrete example. [The Strangest Black Holes in the Universe]

To learn more about black hole gas accretion, astronomers looked toward a cluster of about 50 galaxies collectively known as Abell 2597. The scientists then zeroed in on a single galaxy near the core of Abell 2597, known as the Abell 2597 Brightest Cluster Galaxy, using the Atacama Large Millimeter/submillimeter Array (ALMA) in Chile. This galaxy is located about 1.23 billion light-years from Earth, the scientists said. The researchers generated a 3D map of both the locations and movements of cold gas near the center of this giant elliptical galaxy with unprecedentedly high sensitivity and detail.

The Abell 2597 Brightest Cluster Galaxy's innermost 97,000 light-years contained not only warm, ionized gas but also far colder molecular gas equal to about 1.8 billion times the mass of the sun, the researchers reported in the new paper. The warm gas apparently surrounds the cold gas clouds like a skin; the outer regions of these clouds are likely heated by intense radiation from their surroundings, the researchers noted.

The scientists directly observed a clumpy rain of cold molecular gas clouds moving toward the core of the Abell 2597 Brightest Cluster Galaxy at about 671,000 mph (1 million km/h). These clouds are likely up to dozens of light-years across, with masses of about 100,000 to 1 million times the mass of the sun, and are likely located within several hundred light-years of that galaxy's central black hole, the new research paper said.

"It's simply a beautiful, clean demonstration of cold gas moving inward toward the heart of a galaxy," Grant Tremblay, an astrophysicist at Yale University in Connecticut and lead author on the study, told Space.com.

Under the right conditions, these clouds cast shadows when backlit by intensely hot, bright gas near the black hole, the new work showed. (Previous research found that the Abell 2597 Brightest Cluster Galaxy's central black hole is about 300 million times the mass of the sun.)

Over time, "if the clouds really are that close to the black hole, we should see them physically move on human timescales — that is, six months to a few years," Tremblay said. "We might actually see a movie of cold black hole accretion! That would be really, really cool."

These findings suggest that supermassive black holes may not grow by steadily devouring gas. "If these 'cold rainstorms' are both long-lived and common in massive galaxies, it might mean that our understanding of black hole growth needs to be reconsidered," Tremblay said.

If clouds are falling straight into the Abell 2597 Brightest Cluster Galaxy's supermassive black hole, then the black hole may accumulate about up to several solar masses per year, the researchers estimated. However, if clouds are spiraling into this black hole instead, then it may grow more slowly, Tremblay said.

The scientists detailed their findings in the June 9 issue of the journal Nature.