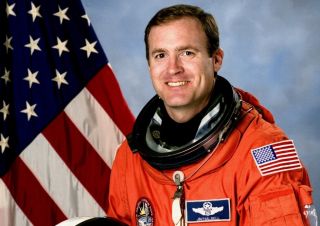 Former NASA astronaut James Halsell Jr., seen here in a NASA photo taken before the STS-101 flight of the space shuttle Columbia, which lifted off in May 2000. Halsell commanded the mission.
(Image: © NASA)

A former NASA astronaut has been charged with murder following a car crash Monday (June 6) that killed two girls, according to media reports.

According to Alabama State Police troopers, a Chrysler 300 driven by James Halsell Jr. — who commanded three space shuttle missions and piloted two others from 1994 through 2000 — crashed into a Ford Fiesta early Monday morning on a highway east of Tuscaloosa, Alabama, the Associated Press reported.

Eleven-year-old Niomi Deona James and 13-year-old Jayla Latrick Parler were thrown from the Fiesta and killed, and two adults in the same car were injured and taken to the hospital, the AP reported.

Alabama state police said that "alcohol and speed may have been factors in the crash," the AP reported.

Halsell, 59, joined NASA's astronaut corps in 1991 and first flew in 1994, piloting the space shuttle Columbia on its STS-65 mission. He piloted the shuttle Atlantis on its STS-74 flight in 1995, then commanded three shuttle missions: the STS-83 and STS-94 flights of Columbia in 1997 and the STS-101 mission of Atlantis in 2000. Halsell racked up more than 1,250 hours in space during these flights, according to his online NASA biography.

He also led NASA's Space Shuttle Return-to-Flight Planning Team after the tragic loss of the shuttle Columbia, which broke apart during its return to Earth on Feb. 1, 2003, killing all seven astronauts aboard.

Halsell is a former test pilot and a retired U.S. Air Force colonel. He left NASA in 2006 to take a job with ATK Launch Systems in Utah.